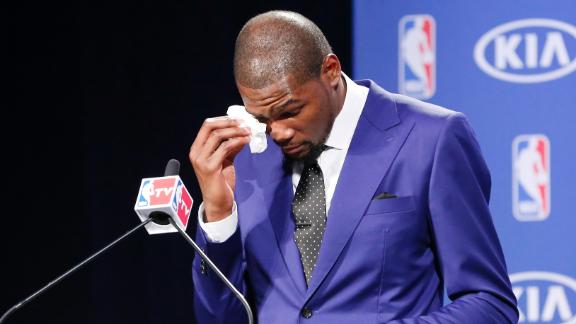 OKLAHOMA CITY -- Kevin Durant has plenty of scoring titles. Now, he finally has an MVP trophy to go with them.

Joakim Noah and James Harden rounded out the top five.

An emotional Durant thanked everyone from his teammates to his mother, Wanda Pratt, at a ceremony in Edmond, Okla., on Tuesday.

"You made us believe, you kept us off the streets, put clothes on our backs, put food on the table," a teary-eyed Durant said to his mother, who was in attendance. "You the real MVP."

Durant also thanked veteran forward Caron Butler, who shortly after signing with the Thunder on March 1 placed a note in Durant's locker that read, "KD MVP."

"I don't really say much in those moments, but I remember that," Durant said. "I go home and I think about that stuff, man. When you got people behind you, you can do whatever."

Durant won his fourth scoring crown in five years by averaging 32 points. The 6-foot-9 forward helped the Thunder go 59-23, second-best in the league, despite playing much of the season without three-time All-Star Russell Westbrook by his side because of a nagging knee injury.

"Everything in my life, I had to take it," Durant said. "They're not going to give it to you out of sympathy. I wouldn't want it any other way. This was another case, if I wanted to win the MVP, I had to go take it. I felt that this was the year I did that."

Durant, who averaged 32.0 points, 7.4 rebounds and 5.5 assists, becomes the first player to win both the scoring title and the MVP award in the same season since Allen Iverson did it in 2000-01.

"He's basically put himself in front of everybody else in the league and shown that he's the best player in the world," Westbrook said at the end of the regular season.

James agreed, saying Monday: "He deserved it, for sure. It's big-time on his part. His maturity level went up every single season both on and off the floor."

James made a point not to compare the expectations placed on Durant after winning the MVP and his own experience.

After the Miami Heat's 107-68 win against the Brooklyn Nets Tuesday night, James said he thought Durant and the Thunder were more consistent this season.

With Tuesday's voting results, Durant and James set an NBA mark, finishing in the top two in MVP voting for the fourth time, surpassing Michael Jordan and Magic Johnson, who were in the top two on three occasions.

Durant's run of 41 consecutive games this season with at least 25 points was the third-longest streak in NBA history.

"It was a two-man race, and then toward the end, it was kind of a no-brainer," Griffin said.

James averaged 27.1 points, 6.9 rebounds and 6.3 assists while shooting nearly 57 percent from the field.

"It's an honor, really," he said of finishing third. "It's hard to believe. I'm honored and humbled by that."

Durant scored at least 40 points 14 times. He also averaged 7.4 rebounds and a career-high 5.5 assists while shooting 50 percent from the field.

While Westbrook was out after his most recent knee surgery, Durant averaged 35 points and 6.3 assists as the Thunder went 20-7 and remained among the league's elite.

Westbrook's injury gave Durant an opportunity to use his improving skills as a playmaker.

"I've always been a player that was excited for my teammates' success," Durant said.

Teammates and opponents say Durant became a more complete player this season. They praised him for improving his court vision, consistently making the extra pass and moving more efficiently without the ball.

"I think we take it for granted," teammate Nick Collison said. "To be able to stay on for long periods of time -- have to cut hard, catch the ball in the right spot and defend on the other end -- is tough to do. To be able to show that shows that he has an edge to him. He doesn't take a night off."

Durant's slight build could be considered one of his few weaknesses, but he has improved in dealing with opponents who try to push him around.

Though Durant's consistency stood out this season, he had several exceptional games. He scored 48 points on Jan. 4 at Minnesota, then scored 48 again two games later at Utah. He scored a career-high 54 points in a home win against Golden State on Jan. 17 and two games later scored 46 at home in a victory against Portland.

Two games after that, he had a triple-double -- 32 points, 14 rebounds and 10 assists -- in a win at Philadelphia, and he followed that with 41 points in a victory over Atlanta. He scored 51 points at Toronto on March 21 in a staggering 53 minutes and hit the game-winning 3-pointer with 1.7 seconds left in double overtime.

He capped it off in the season finale by scoring 21 of his 42 points in the fourth quarter against Detroit and winning the game with a dunk with 16.5 seconds left. The Thunder overcame a 10-point deficit in the quarter to clinch the No. 2 seed in the Western Conference playoffs.

"I put in so much work and so many people helped me," he said. "I feel like we all won it. Our equipment guy gave me a hug today and said, 'This is my first MVP,' and I thought about that. And I said, 'Yeah, this is our first MVP.' I couldn't have done it without the teammates, without the trainer. Everybody. We all just did this together."

Information from ESPN.com's Marc Stein, ESPN.com's Tom Haberstroh, ESPN Stats & Information and The Associated Press was used in this report.

Emotional Durant On MVP
A deeply emotional Kevin Durant thanks his mother for her dedication to make sure he succeeded and explains how Caron Butler's note touched him.

Winning MVP Surreal For Durant
Oklahoma City Thunder star Kevin Durant talks about falling in love with the game of basketball, how it changed his life and the surreal feeling of being the NBA's MVP.