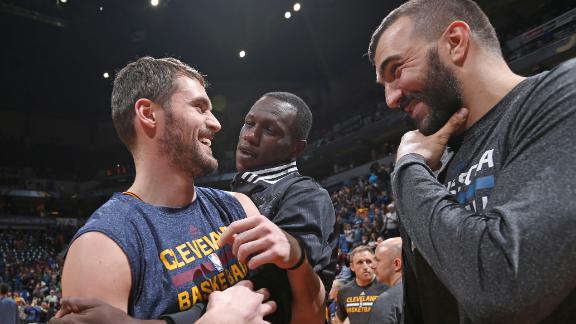 ESPN
By Dave McMenamin
MINNEAPOLIS -- The Minnesota Timberwolves' promotional video "#TheReturn," a spoof of the Cleveland Cavaliers' visit being all about Mike Miller's return to the Target Center rather than Kevin Love's, was meant to be a joke, but Flip Saunders isn't laughing.

"I was not aware of the video a lot of people are talking about," Saunders, the Wolves' coach, president of basketball operations and part owner, said before Minnesota hosted the Cavaliers on Saturday night. "Didn't know about it, didn't approve of it. I think as an organization we should be above that."

As Love had predicted, he was showered with boos in pregame introductions before the Cavs beat the Wolves 106-90.

"Truth be told, I thought it was a pretty good reception, especially from people, familiar faces," Love said after the game. "It was nice to see, shake hands, give a lot of hugs to different people and smile, wave at [them].

"[Owner] Glen and Becky Taylor came over to me and said some really nice stuff. Different teammates from the past, different guys over on the other bench. Flip, as well, I gave him some love in the second half."

Love finished with 14 points on 6-for-14 shooting and 17 rebounds but was just 1-for-5 on 3-pointers. The Cavaliers were powered by LeBron James, who scored 16 of his 36 points in the fourth quarter as Cleveland won its 10th in a row.

"It all went pretty well, and we ended up getting a win," Love said. "Like I said earlier before the game, that's what we came here to do. We walked away with 10 straight."

James said the Cavaliers were standing behind Love in his return.

"It was all our responsibilities as his teammates and his brothers to protect him tonight," James said. "Throughout anything, it was the uncertainty. He didn't know what to expect. He could lean on us throughout everything that happened today, and for us, we just had to go out there and help him get a win."

Earlier this week, Love had called the promotional video "hilarious" and said it played to his "dry sense of humor." He reiterated after the game that he "didn't take it wrong at all."

"I know Flip has a good sense of humor but I guess being in the front office and also being the coach and having played a number of roles in different organizations, Flip usually has the last word and holds a lot of power. So I feel like maybe he sees it a different way," Love said.

However, Miller, who ended up being the butt of the joke, also wasn't so impressed.

"It is what it is," said Miller, who played just one season in Minnesota, averaging 9.9 points per game in 2008-09 for a Wolves team that went 24-58. "I'll never [have an] answer for anything that happens between [the] marketing [side]. Their job is to market and sell."

Saunders seemed to think their job should include running their videos by him before releasing them to the public.

"Would San Antonio do that? No. They wouldn't do that," Saunders said. "Our players didn't like it. They have to play against [Love], too. They didn't like it. It just doesn't send the right message. ... So, was it funny? Maybe people thought it was funny.

"For me it wasn't great having to deal for three or four hours the last two days having people call me and talk about it as I'm trying to prepare for games. Maybe you think it's OK. That's up to you. But I don't look at it that way -- as someone who is running an organization and has to go out and has to recruit players and has to do those things to get those players.

"[Love] might have thought it was funny. But I know, deep down in his heart, no one would like that. It's human nature."

Love was the first player introduced in the starting lineup for the Cavs, and there was a hearty chorus of boos from the Minnesota crowd.

One fan held a sign that read, "For Love or Money?" Next to him, a fan held another sign with the inscription, "Where's the Love?"

During a first-quarter timeout, the Wolves had a brief presentation on their video board to honor Love. The public address announcer mentioned Love ranking second in rebounds, third in scoring and second in 3-pointers made in Minnesota franchise history. Love's charitable efforts, including collecting winter coats for the needy, also were mentioned. However, the graphic that displayed his accomplishments classified Love as a two-time All-Star, rather than the three-time All-Star that he was during his time in Minnesota.

"We have to acknowledge that Kevin, when he was here, he was a great player for us," Saunders said before the game. "He was an All-Star. He won an Olympic gold medal, did a lot of positive things. And, last year, at this time, everyone was patting themselves on the back for getting him selected into the All-Star Game for us.

"To not acknowledge that, to go the other way, I would say would be hypocritical. So I have addressed some of the people, told them of my displeasure [about the spoof video]. And that, as an organization, that's not the direction we want to go."

Timberwolves owner Glen Taylor and his wife, Becky, approached the Cavs' bench shortly before tipoff, hugged Love and chatted for a short time. Love hadn't spoken to Taylor since being traded.

Saunders said he and Love didn't have any personal problems between them, even though the coach refused to answer questions about the three-time All-Star when the Wolves played in Cleveland earlier in the season.

"It's like when you have kids," Saunders said. "Your kids do something wrong, you might be mad at them, but it doesn't change that you don't like them or love them. It's the same thing. That's kind of how you approach it."

One silver lining to Love's return for the Wolves, who rank dead last in the league in attendance at 13,759 fans per game, was that they sold out Saturday night's game and then some, releasing 500 standing-room-only tickets on top of their regular capacity.

Saunders said his team is content with getting rookie Andrew Wiggins out of the Love deal, although he knows that the two will always be linked to one another.

Appropriately, considering the night, Wiggins scored Minnesota's first basket on a 3-pointer, which was met with raucous cheers. Love scored the first bucket for Cleveland on a putback and predictably was booed for it.

Wiggins had 33 points and four steals for the Timberwolves in a stirring duel with James.