Kimbrel gets save in 'awesome' debut with Cubs 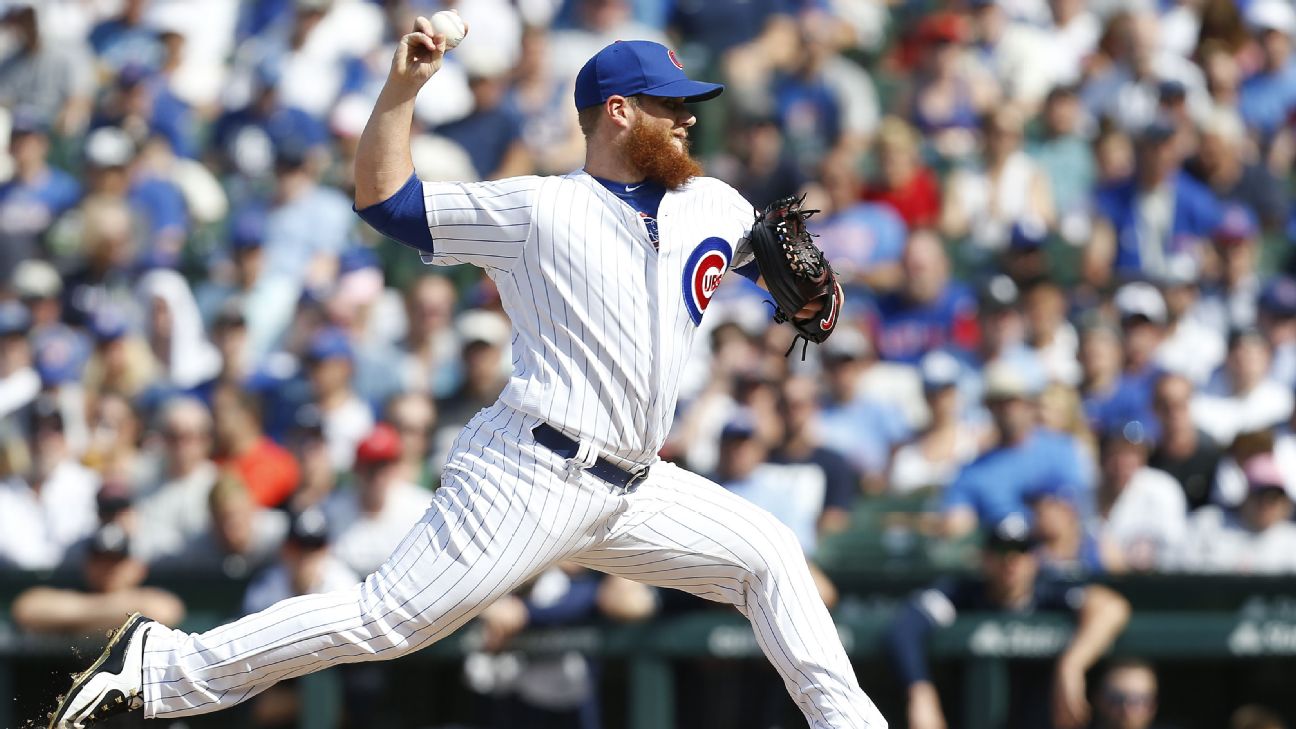 CHICAGO -- It wasn't without drama, but new Chicago Cubs closer Craig Kimbrel did his job in nailing down his first save on his very first day on the job at Wrigley Field. Kimbrel got the first two outs in the ninth inning Thursday, then gave up a double and four-pitch walk before inducing Freddie Freeman to ground out and preserving a 9-7 Cubs win over the Atlanta Braves.

"It was awesome," an understated Kimbrel said after the game. "As a competitor you always want to be in this spot. It was nice today, it worked out like that."

The last inning began as Kimbrel walked in from the bullpen to "Sweet Child O' Mine" by Guns N' Roses and the fans rose to their feet. As he did his signature move -- dangling his right arm before throwing a pitch -- the crowd hollered again.

"It's a lot better when they're on your side," Kimbrel said with a smile. "I can tell you that."

Teammate Steve Cishek added: "He deserves that type of ovation. You kind of get goose bumps. That was pretty cool. It fired me up."

Kimbrel didn't disappoint the Wrigley faithful as he hit 97.6 mph on his first pitch as a Cub. In fact, his first eight pitches were all in the zone.

"I was really impressed with how he just walked out there and started firing strikes," Cubs manager Joe Maddon said. "Very much in control of his emotions which spoke loudly to me."

Adding to the drama, Kimbrel froze on the two-out Freeman ground ball to first baseman Anthony Rizzo, so Rizzo took it to the bag himself, diving to touch first base like a running back hitting the pylon in the end zone. The closer might have an excuse, considering he hadn't played a game in nearly eight months. Kimbrel signed a three-year, $43 million deal just recently as he waited until nearly half the season was over before agreeing to terms with a team. The Cubs have languished near the bottom of the league in save percentage so the marriage seemed like a perfect one.

If Thursday is any indication, the rewards they'll reap from Kimbrel are already coming to fruition -- and it has nothing to do with the ninth inning. His presence allowed Maddon to deploy his better arms earlier in the game. After Tyler Chatwood was removed after five innings, Cishek, Brandon Kintzler and Pedro Strop were able to bridge the innings to Kimbrel.

"I think it's just a preview of what's to come in terms of our bullpen," Cishek said. "Any one of us can lead up to him. For me to come in the sixth, was kind of nice. It was fun to get that ball rolling to get it to the main man."

Kimbrel figures he'll need about a week to really feel up to speed after missing so much time, but for his first outing, it was exactly what he and the Cubs were hoping for.

"It's been a little bit," Kimbrel said. "It was nice to get out there, have the fans behind me. Came out on top.

"I've had a chance to pitch in front of a lot of loud crowds. Today was another one. Pretty awesome."
Report a correction or typo
Related topics:
sportsespnmlbcraig kimbrelchicago cubs
Copyright © 2020 ESPN Internet Ventures. All rights reserved.
More Videos
From CNN Newsource affiliates
TOP STORIES