Kobe Bryant goes off on teammates 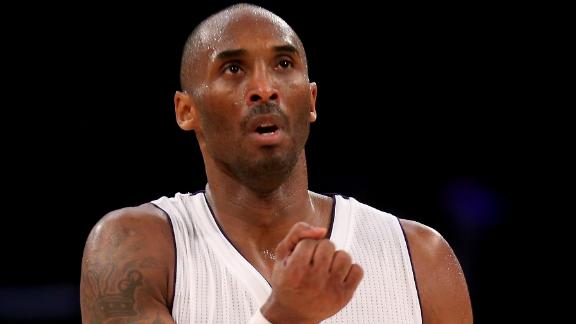 EL SEGUNDO, Calif. -- Kobe Bryant returned to practice for the first time this month and called his teammates "soft" during a heated 5-on-5 scrimmage between the starters and reserves Thursday.

When practice was opened to the media, Bryant andNick Youngwere already trading barbs during the scrimmage with Young telling Bryant, "Nobody in the world can guard me one-on-one," and Bryant telling Young, "You'regoing exactly where I want you to go."

Charmin, a toilet paper brand, got in on the fun later Thursday, tweeting:

Lakers coach Byron Scott has held Bryant out of most practices and shootarounds this season. Thursday was the veteran star's first full practice with the team in over two weeks.

By the end of the scrimmage, which the starters won, Bryant said, "Practice gets real uncomfortable when I'm in this m-----f-----."

Bryant said Thursday's practice was no different than any other one he participates in except for maybe the fact the media got a courtside view of him trying to motivate his younger teammates.

"No, I was just being myself," Bryant said. "I don't know if it helps them, but it obviously raises the intensity level. It was a tough practice for them ... It's really good for Nick, aside from the fun of bantering back and forth and the trash talk, just fundamentally some of the techniques and things that I use. He gets a chance to really see up close those little tricks."

Bryant said Young got the trash talking started Monday. "I think Nick probably regrets getting me started at practice and saying something," he said.

And what did Bryant think when Young said no one could guard him one-on-one? "Thank god, I'm not from this world," Bryant said.

Ideally, Bryant would like to practice more than he has this season, but at 36, in his 19th season and coming off a pair of serious injuries and surgeries, he and the team would rather Bryant save himself for games.

"It's a balance," Bryant said. "At this stage of my career, it's tough to get out there. My body's just not ready. My body can't do it. So we have to try to pick our spots a little bit. Hopefully the guys can carry the energy of this practice a little bit. As often as I can get out there and do what I did today, I'm all for it. I had so much fun being out there. Just the level of excitement of being able to play and compete in practice ... I've always enjoyed practices more than the games, actually.

"I just challenge guys and see what happens. I've always believed in throwing them in the pool and seeing if they can sink or swim."

After Thursday's practice, Scott smiled when asked about Bryant returning to practice before the Lakers boarded a charter flight to San Antonio to play theSpurson Friday night.

"Any time (No.) 24 practices, it's going to be an intense practice," Scott said. "I think he brings out the best in the guys. It's a good way to start the trip ... I don't think anything irritated him. I just think he did a great job of getting everyone else fired up. He's always fired up. That's the great thing about him. He's such a competitor. When he comes out here the intensity level in practice goes sky high and he challenges guys, which is what you should do. Today, (the reserves) responded by getting their butts kicked and they wanted to play again but I told them we have three games in four nights we we'll have to do it another time."

Bryant and Young hadn't been involved in a scrimmage together since Young tore the radial collateral ligament in his right thumb while guarding Bryant during training camp two months ago.

"I haven't seen Kobe practice like that in a while," Young said. "I've been waiting to get back out there since he hurt my thumb and talk some trash. It's been almost nine weeks since we got the chance to (talk trash) a little bit. It brings out the best in practice when you're going at it like that."

Young pulled Lin andJordan Clarksonaside after practice and talked to them about standing up for themselves when Bryant comes at them during practice and to not allow him to walk all over them.

"You can't back down from a challenge, no matter who it is," Young said. "Me and Kobe are always going to talk trash and get into it. When he talks to everybody else, some people tend to shy away and I was telling them you have to have some cojones in this league. It doesn't matter who it is. Play your game. Don't get any less confident out there. Talk trash right back to him."

As he left the Lakers' training facility, Bryant smiled again when asked about Thursday's practice.

"Back in my younger days," Bryant said, "I used to practice like that every day."