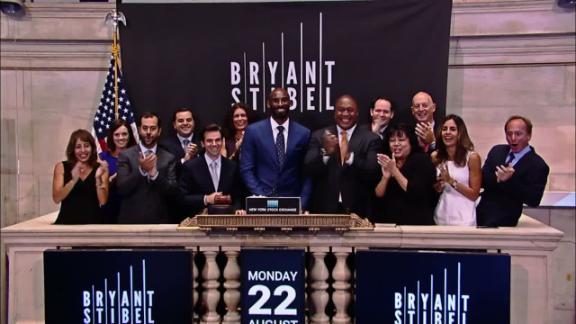 Kobe Bryant announced Monday that he was starting a $100 million media, technology and data fund.

Bryant will partner with investor Jeff Stibel, the vice chairman of Dun & Bradstreet, chairman of brain implant system BrainGate and former president of Web.com. Bryant has been privately investing with Stibel.

The venture, which is not open to outside investors, has already invested in 13 companies, according to The Wall Street Journal, including The Players' Tribune, video game designer Scopely, LegalZoom, apparel T-shirt company Represent, Chinese e-commerce company Alibabaand VIPKid, a company that provides a North American school experience to children in China.

"This is one of my passions," Bryant said on CNBC after he rang the opening bell on the New York Stock Exchange. "We are one gear, 100 percent laser focused, and here we go."

The fund does not include Bryant's personal investments he makes through Kobe Inc., a company he started in 2014. His first investment was in sports drink company BodyArmor, which partnered with the Los Angeles Lakers for his final game merchandise. The $1.2 million in merchandise sold at the Staples Center on April 14 set an industry record for merchandise sales at a stadium and arena in a single day.

That didn't include apparel sold just by Kobe Inc., which offered T-shirts with the words "Mamba Out," the last words Bryant said before walking off the court for the final time after he scored 60 points in his career finale. His company recently filed to trademark that phrase, though it will be second in line behind two men who filed a trademark a couple days after Bryant said it.

Other NBA players have made a dent in the investing world, including Lakers great Magic Johnson. His personal business, Magic Johnson Enterprises, made investments in urban-area real estate, and he has had several real estate funds, with Canyon Capital, Yucaipa and JLC Loop Capital, that raised more than $3 billion.