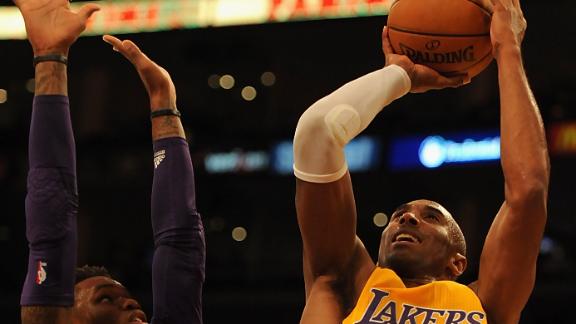 LOS ANGELES -- Kobe Bryant and nearly all of his Los Angeles Lakers teammates wore black T-shirts that read "I Can't Breathe" before a 98-95 win against Sacramento on Tuesday night.

The Lakers each had the T-shirts on their chairs in the dressing room before the game. Every player except backup center Robert Sacre wore the shirts.

"I think it's us supporting that movement and supporting each other as well as athletes," Bryant said after the game. "I think the beauty of our country lies in its democracy. I think if we ever lose the courage to be able to speak up for the things that we believe in, I think we really lose the value that our country stands for.

Bryant and the Lakers followed the lead of LeBron James, Derrick Rose, Kevin Garnett and other athletes across American sports by wearing the shirts to support the family of Eric Garner, who died July 17 after a police officer in New York placed him in a chokehold while Garner was being arrested. A recording of Garner's arrest showed him gasping "I can't breathe" during the fatal encounter, and thousands have protested a grand jury decision not to indict the officer.

Players are required to wear attire of Adidas, the NBA's official apparel provider, but a league source told ESPN's Jeremy Schaap earlier in the week that the NBA will not fine players who wore the shirts in warm-ups.

"I respect Derrick Rose and all of our players for voicing their personal views on important issues, but my preference would be for players to abide by our on-court attire rules," commissioner Adam Silver said Monday.

Lakers coach Byron Scott said he would support his players.

Bryant insisted the growing unrest is not limited to issues of race.

"I think it would be a serious disservice to limit this to a race issue. It's a justice issue," he said. "You're kind of seeing a tipping point right now, in terms of social issues. It's become now at the forefront right now as opposed to being a local issue. It's really been something that has carried over and spilled into the mainstream, so when you turn on the TV and you watch the news or you follow things on social media, you don't just see African-Americans out there protesting.

"It's become a thing where people are really standing up for their rights and really questioning the justice system and questioning the process of the legal system and those who have authority -- and whether or not they're abusing authority and what's the threshold to use deadly force and so forth and so on. But that's what our nation is founded on, man. We have the ability to question these things in a peaceful fashion. That's what makes us a great country. We have the ability to voice up, we have the platform to speak up, and we have the platform to affect change."

ESPNLosAngeles.com's Baxter Holmes and The Associated Press contributed to this report.