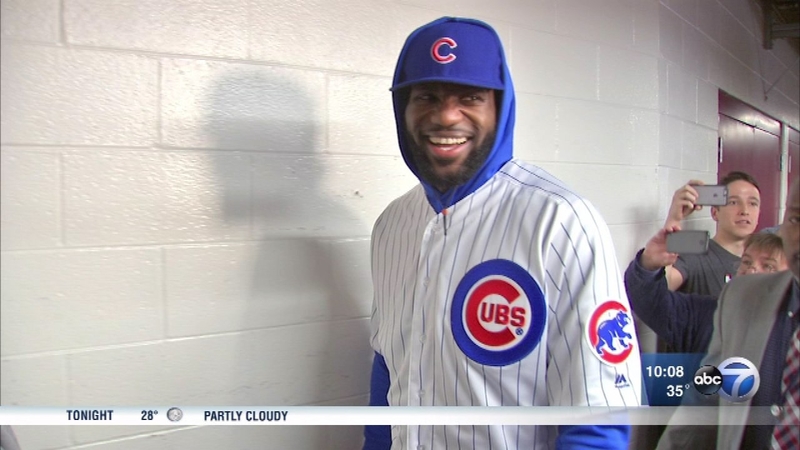 CLEVELAND -- LeBron James was Mr. Cub for a little while.

The moment has FINALLY arrived! @KingJames rocking the @Cubs gear to honor his World Series bet payoff to @DwyaneWade. 🐻 pic.twitter.com/9WCgGAILt2

The #Cubs have unofficially signed @KingJames to a 1-day deal.https://t.co/JAfJABmJYl

To pay off a bet on the World Series he lost to close friend Dwyane Wade, James wore a Cubs cap, jersey, pants and socks to Friday's pregame shoot-around in Chicago before the Cavaliers play the Bulls.
James made a friendly wager on the Series between the Cleveland Indians and Cubs with Wade, his former Miami teammate and Chicago native who returned to play in his hometown this season. The Indians lost in seven games as the Cubs rallied from a 3-1 deficit to win their first championship since 1908.

"I'm not wearing cleats," James said Thursday after the Cavs' morning shoot-around. "I got a basketball game to play. No glove. Just the uniform. I will be in uniform."

Wade posted a clay animation video of LeBron modeling the Cubs uniform. His narration of LeBron's imagined catwalk was sure to draw laughs.

"Look at the socks, people. Let's not forget the socks," Wade said in the video. "I would think he lost a bet. Mm. Me oh my."

"It's a bet," James said. "You have to fulfill your bet. Nothing more to it."

It's a bit easier to make good on his bet since he led the Cavs to the NBA title in June, ending Cleveland's 52-year championship drought.

James and Wade played together for four seasons in Miami, leading the Heat to two titles and four straight Finals appearances. James said it will be different to see Wade, who signed with Chicago as a free agent last summer, in another jersey.

"It's going to be pretty cool, not only just because he's in a different uniform but just him being back home and understanding what his journey is right now," James said. "I think it's more than just basketball for himself, being back home in Chicago."