Lilly King: Those with doping histories shouldn't be on team 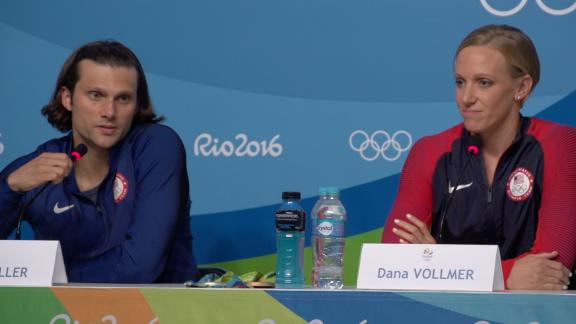 ESPN
After claiming gold in the women's 100-meter breaststroke and conquering her new nemesis, Yulia Efimova, American swimmer Lilly King took aim at all Olympians who have been caught doping -- including her fellow Americans.

The 19-year-old from Indiana was asked about fellow American and 2004 gold medalist Justin Gatlin, who has twice been suspended for doping but will be competing in track and field at the Rio Games.

"Do I think people who have been caught for doping offenses should be on the team? No, they shouldn't," King said Monday night after her victory. "It's unfortunate that we have to see that and then it's such a tossup in between sports and in between countries. It's something that needs to be set in stone that this is what we're gonna do to settle this and that should be the end of it. There should not be any bouncing back and forth."

The source of the feud is the suspension handed down to Efimova, who missed 16 months for doping and tested positive this year for the now-banned substance meldonium. The positive meldonium test was placed on hold while world anti-doping officials conduct further studies on the drug. A smattering of boos greeted Efimova after she won her preliminary heat Sunday.

After staring down Efimova in the ready room on Monday and giving her a look of disdain on deck, King led all the way to take the gold with an Olympic-record time of 1 minute, 4.93 seconds.

Efimova, who heard a round of boos and a few cheers during the introductions, settled for the silver in 1:05.50. The bronze went to another American, Katie Meili.

"It just proves you can complete clean and still come out on top with all the hard work you put in behind the scenes, behind the meet, at practice and in weight sessions and there is a way to become the best and do it the right way," King said.