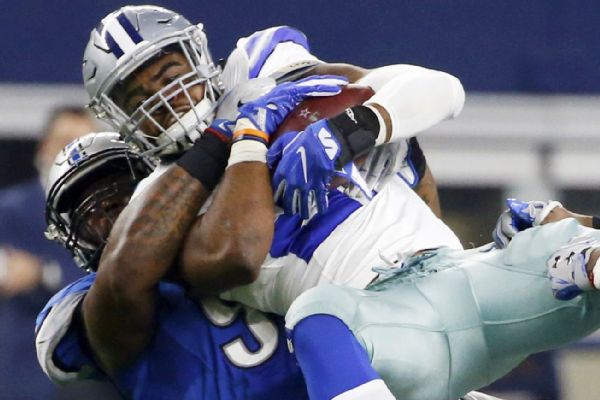 Robinson was flagged while tackling Dallas Cowboys running back Ezekiel Elliott and potentially body-slamming him to the ground. Depending on the vantage point, though, it also could have been viewed as a hard -- but legal -- tackle.

The 15-yard penalty came on a drive that eventually led to a Dez Bryant touchdown pass to Jason Witten to give the Cowboys a 35-21 lead en route to their 42-21 victory over Detroit on Monday night.

"You know I don't get into talking about officials and what they call and what they didn't call," Caldwell said. "I yell at 'em and tell them what I felt on the field, and when it's over, it's over. The call they made, they made.

"They're not going to go back and change it, and we have a way in which we can voice our opinion without necessarily talking to the media about it because it doesn't really function that way in terms of our system, so we'll use the protocol, the proper vehicle to do just that."

A day later, Caldwell's opinion of the call hadn't changed.

Caldwell again referred to following "protocol" to make sure the NFL knows how the Lions feel about the call, "rather than complain about things that, really, to me, that borders in on starting to worm in on excuse-making, which I don't want to have any part of."

He said, however, that overall, officials make the fewest mistakes during the course of a game.

"I think, just like I believe, players make the most mistakes in the game. Coaches make the second most. Officials make the fewest, so that's how I feel," he said Tuesday.

After Monday night's game, Elliott told reporters that Robinson had been playing dirty the entire game.

"He was being dirty all game," Elliott said. "I think he was a little salty from that Sugar Bowl win we got against him in New Orleans two years ago. It's whatever. Let him do what he wants to do."

Ohio State beat Alabama 42-35 in the national semifinals on the way to the Buckeyes' national championship that season.