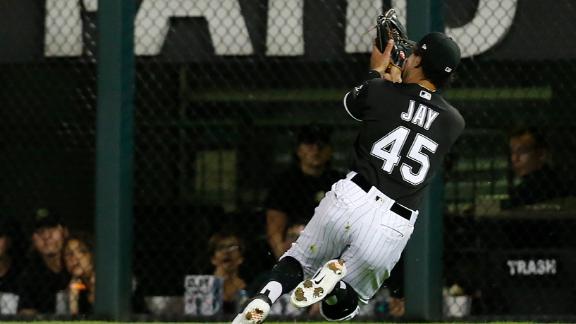 CHICAGO -- Reynaldo Lopez has three keys when he takes the mound: focus, execution and perform.

"For me those are the three keys that I trust and that I try to remember every time that I'm on the field," he said.

It's working quite well for him at the moment.

Lopez pitched shutout ball into the seventh inning, Eloy Jimenez homered on his bobblehead night and the Chicago White Sox beat Tanner Roark and the Oakland Athletics 3-2 on Saturday.

Lopez (7-9) allowed six hits, struck out three and walked three in his second straight win. The 25-year-old right-hander improved to 3-1 with a 2.13 ERA in his last six starts, continuing one of the best stretches of his career.

Oakland pulled within one when Chad Pinder and Marcus Semien scored on third baseman Ryan Goins' two-out error in the ninth. But Alex Colome struck out Khris Davis with the bases loaded to earn his 23rd save in 24 chances.

"It was a frustrating night," Oakland center fielder Mark Canha said. "But it shows the character of our team. We always seem to do that and fight back in the ninth."

The Athletics got another solid performance from Roark, but dropped to 2/3 on their weeklong stay in Chicago. The A's, who are in the mix for an AL wild card, lost two of three against the Cubs before winning 7-0 in the series opener against the White Sox on Friday.

Roark (7-8) allowed three runs and six hits in 6 2/3 innings in his second start since he was acquired in a trade with Cincinnati on July 31. The right-hander, a Wilmington, Illinois native who played college ball at the University of Illinois, won his Oakland debut last Sunday, working five effective innings in a 4-2 victory over St. Louis.

"I just felt like I got beat," Roark said. "It was a pitcher's duel for the most part and Lopez came out on top."

Chicago had a 2-0 lead when Renteria pulled Lopez after he walked Stephen Piscotty with one out in the seventh. Lopez was saluted with a standing ovation from the crowd of 27,026 as he walked toward the dugout.

A pair of two-out walks loaded the bases for Pinder, who sent a pinch-hit drive off Aaron Bummer toward the gap in right-center. But Jon Jay made a sliding, over-the-shoulder grab to rob Pinder of extra bases.

Bummer waited in front of the dugout to greet Jay as he came in from the outfield after the terrific catch . The White Sox also turned three double plays in their fifth win in seven games.

"Defense was off the charts tonight," shortstop Tim Anderson said.

Jimenez connected for his 19th homer in the fifth, sending a solo drive over the wall in right-center. The crowd celebrated with their bobbleheads commemorating the rookie's first career homer April 12 against the New York Yankees.

The White Sox optioned reliever Jose Ruiz to Triple-A Charlotte after the win. They said they will make a corresponding move before the series finale.

Athletics: C Josh Phegley (left thumb contusion) will begin a rehab assignment with Triple-A Las Vegas on Sunday. ... RHP Marco Estrada (lumbar back strain) allowed three runs and five hits in 2 2/3 innings in a rehab assignment with Single-A Stockton on Friday. "He gave up a couple home runs, but I think he felt OK," Oakland manager Bob Melvin said. "Until we get five or six innings with him it's more about health than anything else. These last few times he's felt good enough to up the pitch count the next time."

White Sox: 3B Yoan Moncada (strained right hamstring) worked out, hit and fielded grounders before the game. "I've been feeling better, way better," he said through a translator. "I still have some discomfort, just a little bit, not a big deal. But thank God, I've been feeling very, very good. I wouldn't say 100 percent, but much better." Moncada was placed on the 10-day injured list Aug. 1.

White Sox right-hander Lucas Giolito (12-5, 3.44 ERA) goes for his second straight win Sunday. He tossed six innings of three-run ball in Chicago's 7-4 victory at Detroit on Monday. Chris Bassitt (7-5, 3.80 ERA) pitches for Oakland. The right-hander, who made his major league debut with the White Sox in 2014, is 2-1 with a 2.48 ERA in his last five starts.