Sister Jean, 98, celebrating own busted bracket
WLS
By Will Jones and Dionne Miller
CHICAGO (WLS) -- In its first NCAA Tournament appearance since 1985, Loyola Chicago's basketball team is one win away from an improbable trip to the March Madness Final Four.

The 11th-seeded Ramblers kept up their amazing run with a 69-68 Sweet 16 victory over seventh-seeded Nevada on Thursday night in the South Region in Atlanta.

With the shot clock running down and Loyola clinging to a 1-point lead, Marques Townes knocked down a 3-pointer with 6.3 seconds remaining. He finished with 18 points.

The Ramblers fell behind by 12 points in the early going, but got back in the game when Nevada's run-and-gun offense suddenly went cold. The Wolf Pack's final points of the first half came on Cody Martin's dunk with 7:57 remaining. Loyola closed the half on a 12-0 run and pushed out to a 12-point lead of its own early in the second half.

Nevada rallied and it came to the final seconds. Townes hit the big shot to clinch it.

Loyola improves to 31-5 and will face No. 9 seed Kansas State in the regional final Saturday at Philips Arena.

Dionne Miller chatted with fans excited to see the Loyola Ramblers in the NCAA Sweet 16.

The Wolf Pack finishes the season at 29-8.

The game brought fans their the feet inside the watch party at Bulldog Ale House in Rogers Park.

"It is crazy. It is insane. I always believed them, but it is amazing that they are taking us all this way," said Katie Kouvelas, student.

No one saw this coming. But here they are in the Sweet 16 - No. 11 seed Loyola-Chicago against Nevada.

It's the third straight game that came down to the wire.

"Every game, every game. It is always like that. I love it. I love it," said Kobey Davis, student.

"It was like no words, it's, like, run out of the words. You run out of things to say because you are screaming your head off," said Chelsea Maldonado, student.

"Listen to my voice. There are no words. This is so wild" said Evan Garza, Loyola alum.

Over at the New 400 Theaters, fans caught the action on the big screen.

The Ramblers are now headed to the Elite 8 for the first time in 55 years.

Team Champlain Sister Jean had the Ramblers going home after the Sweet 16. Now she's celebrating her own busted bracket.


LEGOLAND Discovery Center Chicago is getting in on March Madness with a LEGO sculpture in honor of the Loyola Ramblers and Team Chaplain Sr. Jean Dolores-Schmidt.

The 98-year-old nun has been immortalized as LEGO Minifigure and visitors to the Schaumburg attraction are invited to take a selfie with mini Sr. Jean throughout the tournament. 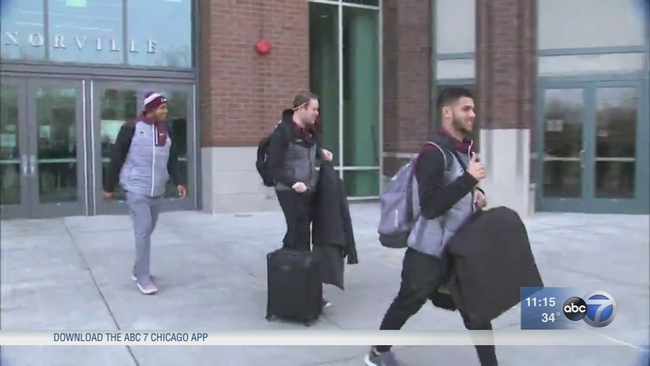 Loyola basketball team leaves for Atlanta ahead of Sweet 16 game 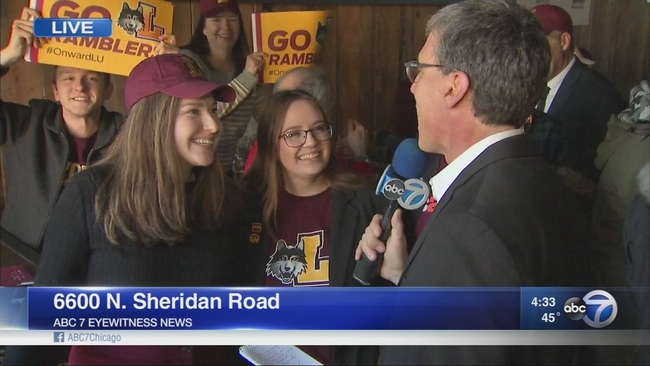