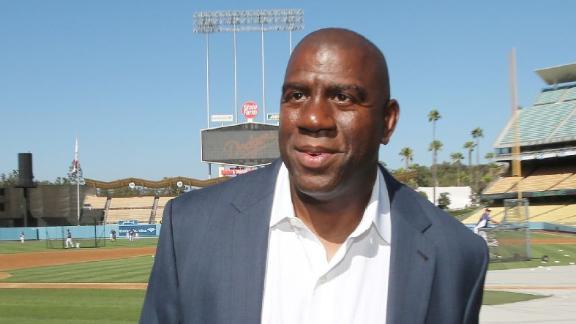 Basketball Hall of Famer Magic Johnson says Los Angeles is ready for the return of an NFL team.

And he thinks it will happen soon, according to Yahoo! Sports.

Farmers Field, a proposed $1.5 billion downtown football stadium connected to an expanded Los Angeles Convention Center, is ready for construction. A competing stadium project proposed by real estate magnate Ed Roski in the City of Industry has been ready to push dirt since 2009, with little traction.

Johnson, part of a group that bought the Los Angeles Dodgers in 2012 for $2 billion, said he would welcome a Raiders return to Los Angeles.

Johnson hung out Tuesday in the Raiders' VIP tent for the team's joint practice with the Dallas Cowboys, alongside former L.A. Raiders including Jay Schroeder, franchise sacks leader Greg Townsend and Jerry Robinson. Johnson was a regular at Raiders games at the Los Angeles Memorial Coliseum and has also been to games in Oakland.

"Al Davis came to all our championship games" with the Lakers, Johnson told ESPNLA 710 AM radio. "I was a Raider season-ticket holder. I'm a Raider diehard.

"Al used to be in his all-white [outfit]. That was so cool. He watched every Finals we had. What was so cool back in the day, we all hung out together -- Marcus Allen, Howie Long -- we hung out with them; they hung out with us. We came to see their games; they came to see our games. I'm just hoping, in the next two years or so, we can finally get a team back to Los Angeles."

Information from ESPN.com Raiders report Paul Gutierrez and ESPNLosAngeles.com's Arash Markazi was used in this report.