Manny Machado, Josh Donaldson among more than 170 headed for arbitration 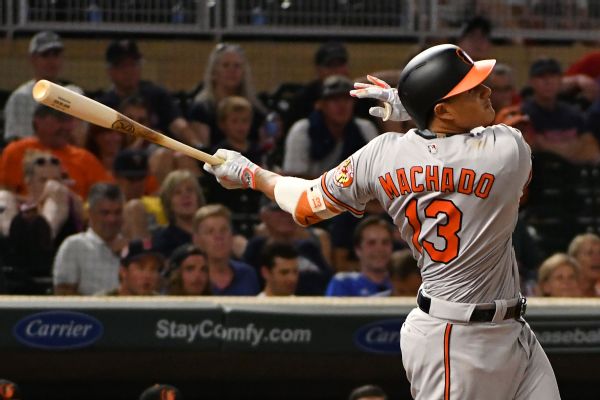 NEW YORK -- The hot corner figures to be sizzling Friday when players and teams swap proposed salaries in arbitration.

Toronto's Josh Donaldson, Baltimore's Manny Machado, Washington's Anthony Rendon and the Chicago Cubs' Kris Bryant were among the more than 170 players headed to the exchange. But most are likely to reach agreement Friday, the busiest day of the offseason.

Machado and Donaldson can become free agents after this season and are expected to command one-year deals approaching or exceeding $20 million. A three-time All-Star, the 25-year-old Machado hit. 259 with 33 homers and 95 RBI last year, when he made $11.5 million. He has been mentioned in persistent trade rumors.

Bryant could break the record for highest salary among players eligible for arbitration for the first time, a mark set when first baseman Ryan Howard was awarded a raise from $900,000 to $10 million by a three-person panel in 2008 instead of Philadelphia's $7 million offer. Bryant, who turned 26 last week, was an All-Star in his first two big league seasons, hitting .292 with 39 homers, 102 RBI and a major league-leading 121 runs in 2016, when the Cubs won the World Series for the first time since 1908.

Bryant agreed last March to a $1.05 million, one-year contract, a record for an unsigned player under club control with less than two years of major league service, and batted .295 with 29 homers and 73 RBI.

For players and teams who fail to reach agreements, hearings will be scheduled for Jan. 29-Feb. 16 in Phoenix.

Teams won eight of 15 decisions last winter, the most hearings since clubs went 10-6 in 2004. Several clubs refused to negotiate after the exchange of proposed arbitration salaries, a so-called "file and trial" strategy.