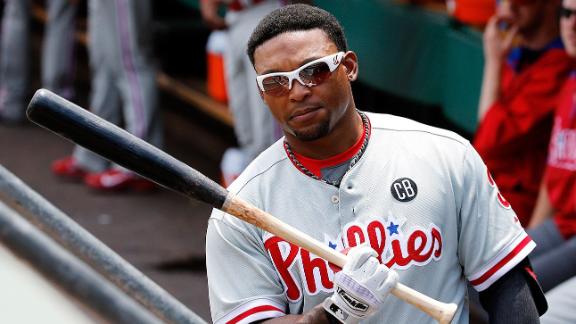 The Cincinnati Reds have acquired veteran outfielder Marlon Byrd in a trade with the Philadelphia Phillies, the teams announced Wednesday.

He gets $8 million next season on the final year of a two-year deal that includes an $8 million team option for 2016. The Phillies included cash to pay part of Byrd's salary as part of the deal.

"Marlon will give us power and run production, and he can play left field," Reds general manager Walt Jocketty said. "We expect him to provide a big bat and balance in the middle of our lineup."

Byrd played center field and right field during his major league career, but came up through the minors as a left fielder.

"Hopefully it's going to be like riding a bike,'' Byrd said during a conference call. "I'm going to have to put a little extra work on it this offseason.''

Byrd, 37, is a career .278 hitter with 131 home runs in 13 seasons with Philadelphia, Texas, the Chicago Cubs, Washington, the New York Mets, Pittsburgh and Boston.

"I know people are going to say he struck out a lot -- he struck out last year more than he has,'' Jocketty said. "He had 28 doubles, 25 homers and 85 RBIs, and that's something we definitely need on our club. Hopefully we can get him to cut down on the strikeouts.''

The Reds, who had been in the market for an outfield bat so far this offseason, considered free agents Michael Morse and Norichika Aoki, among others, before consummating a deal for Byrd.

The 22-year-old Lively made 26 starts last season at Class A Bakersfield and Class AA Pensacola. He combined to go 13-7 with a 3.04 ERA, and was named the organization's minor league player of the year.

"Yes, it's a tough decision to give up a young pitcher, but it really is a strength of our organization, especially right-handed pitching,'' Jocketty said. "They are paying a significant amount of his salary this year, which is the only way we would have been able to do this deal.''