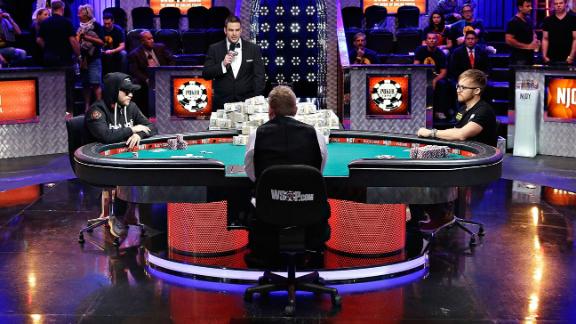 LAS VEGAS -- The Swedish man who got his start playing online poker after late restaurant nights while he trained to be a chef is $10 million richer after winning the top World Series of Poker main event prize Tuesday night.

Martin Jacobson, 27, had three tens to beat Felix Stephensen of Norway and his pair of nines.

"There's no such thing as a 'perfect tournament,' but this was close to perfect, maybe," Jacobson said after the confetti blasts signaled his win had been cemented and friends and family ran to embrace him.

Jacobson would come home late from nights in a restaurant and none of his friends would be awake to chat or hang out, so he started playing online poker, said his mother, Eva.

He was the only player of the final nine to have earned more than $1 million in World Series of Poker career earnings at tournaments. But he had never won the top spot, coming in second in some cases, until Tuesday, when he won the most watched contest in the tournament.

"It's his thing," Eva said during Tuesday's head-to-head play.

Jacobson exhibited a calm stillness throughout the two days of poker playing.

He didn't wear sunglasses, a hoodie or a baseball cap like other players to hide tells. He often stared at his opponents across the table, blinking through black-rimmed glasses.

This wasn't his first try at the big win. He traveled to Las Vegas, days after he turned 21, to enter the main event. But he busted out after a few hands, his mother said.

"I think that was good for him," she said in the lobby of the Penn & Teller Theater at the Rio while her son amassed more chips on stage inside. He learned it wasn't going to be an easy task, she said.

"It's disappointing to be so close, but I got really lucky to get this far, and it was a tough final table," he said.

The two defeated Jorryt van Hoof, the leader throughout most of play, to go head to head.

Van Hoof, a poker pro originally from the Netherlands, had an icy stare and a formidable chip lead against the two other European players going into Tuesday night's final table in the World Series of Poker.

All had been vying for the $10 million top prize and a coveted World Series of Poker gold bracelet.

But on Tuesday night, van Hoof donned a pair of sunglasses, lost his lead, couldn't regain it and finally lost after three hours of play with a pair of fives to a pair of tens held by the man who took his early lead.

The Dutch pro who has his own poker coaching business donned sunglasses for several hands Tuesday night; they hid his usual cold stare.

"I never wore glasses in my life, but it was really hot," he said of the bright studio lights.

"I guess I'm not going to do that anymore," he said, chuckling.

Van Hoof also didn't just have a cheering section making creative use of his name ("Van Hoof, van Hoof, van Hoof is on fire," they chanted). He had an entire team of friends and coaches analyzing spreadsheets, the table play and the half-hour delayed ESPN live broadcast. All that information was given to a captain, of sorts, who then would filter it to van Hoof.

It was the first time in the World Series of Poker's history that the final three players in the no-limit Texas Hold 'em main event didn't include a single American.

All three players live in London.

"I enjoyed playing with these guys," van Hoof said. "We're going to meet up. And the winner will pay for my dinner."

They outlasted six other finalists during 12 hours of play Monday night and into Tuesday morning and began playing again Tuesday night.

Van Hoof had a third more chips than Jacobson and nearly double the total of Stephensen going into the final faceoff.

The main event, culminating this week, is just one World Series of Poker event but certainly the most watched.

About 6,700 people paid the $10,000 entry fee to try their luck over the summer to be finalists in the main event. 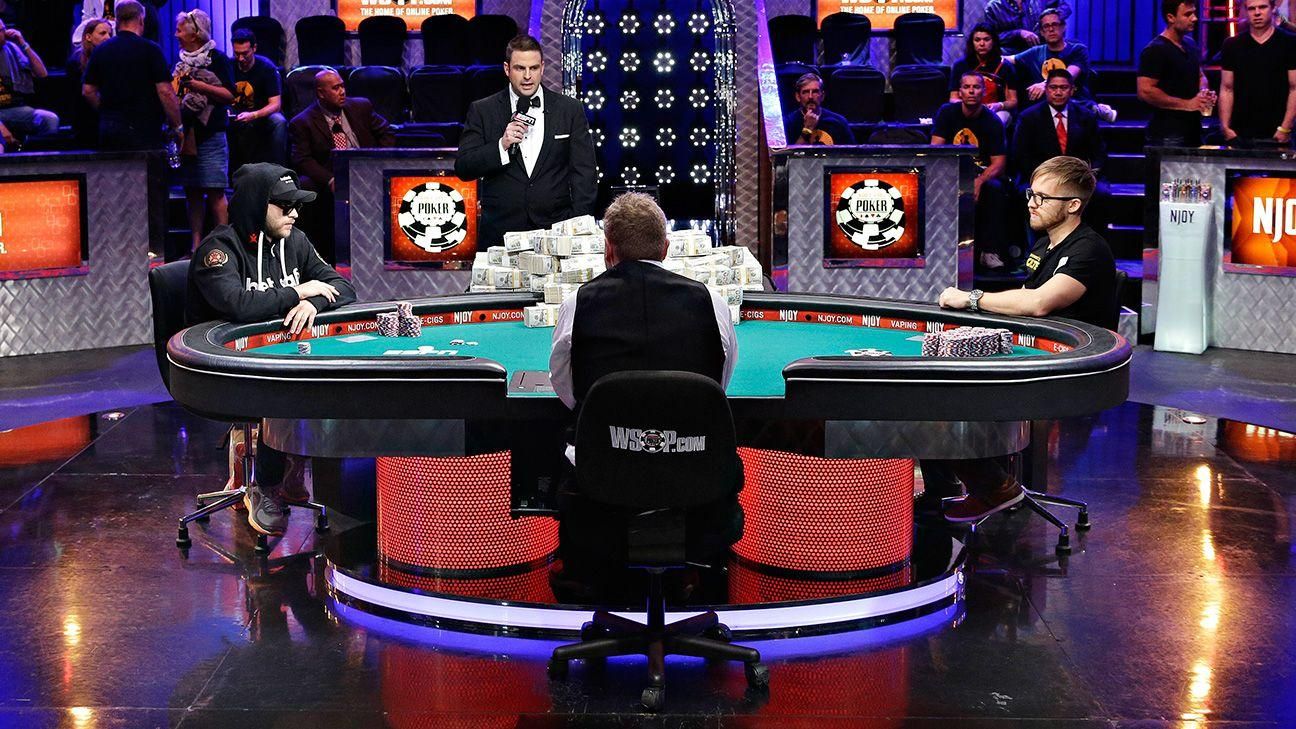 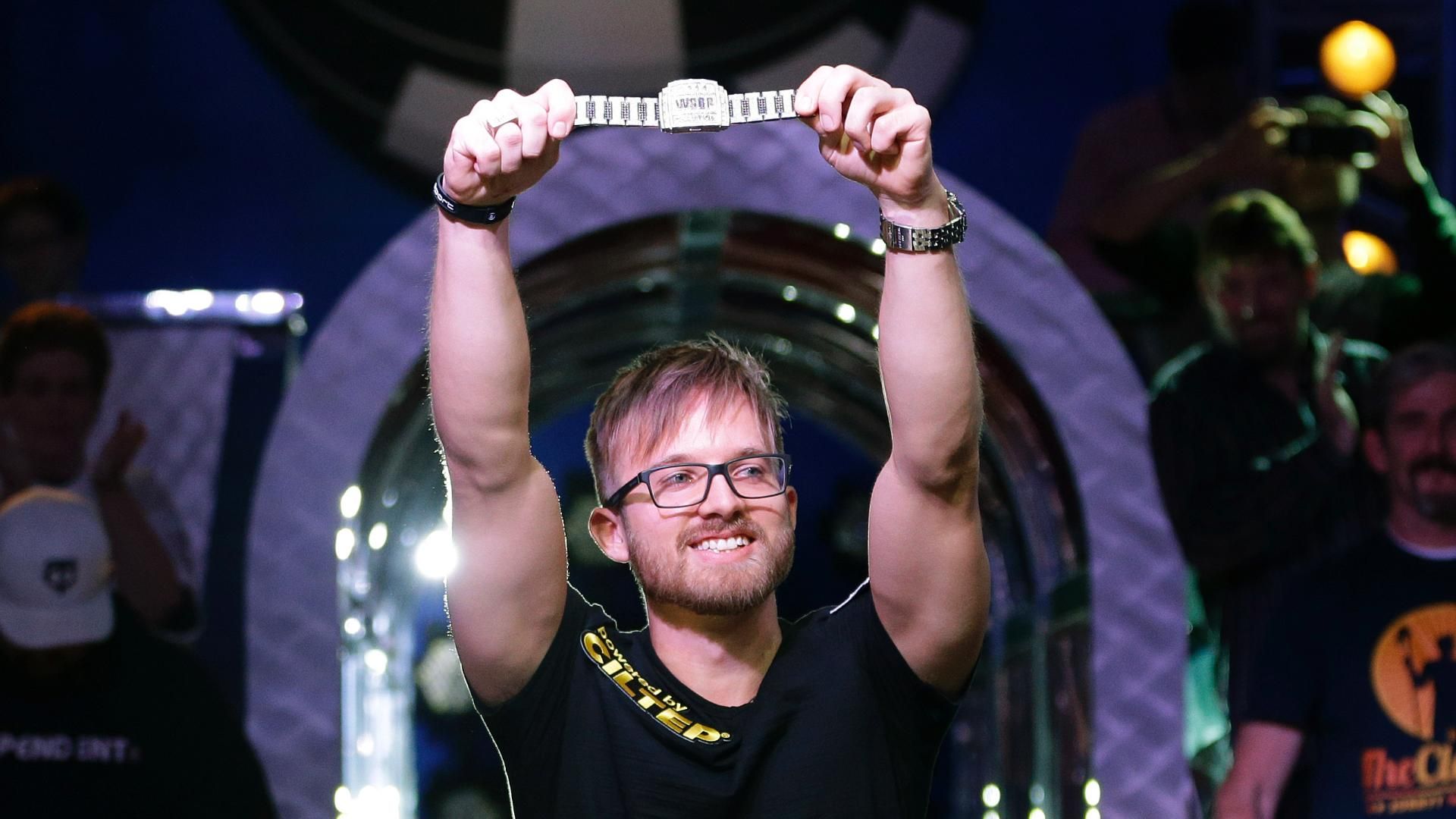