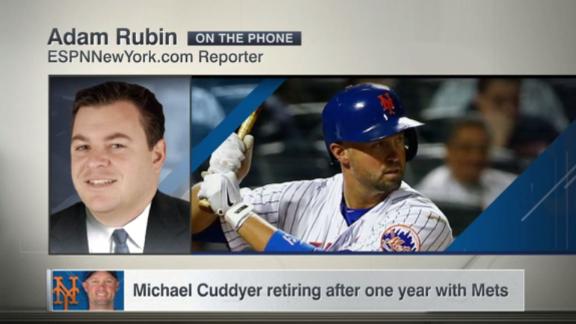 NEW YORK -- Michael Cuddyer is retiring after 15 seasons in the majors, despite having another year remaining on his contract with the New York Mets, he announced Saturday via The Players' Tribune.

Cuddyer, 36, hit .259 with 10 homers and 41 RBIs in 379 at-bats for the Mets in 2015. His playing time was due to further diminish next season with Curtis Granderson and Michael Conforto locked into the corner outfield spots and Lucas Duda at first base.

"I've made the decision to retire. With one year left on my contract, it is especially difficult to imagine not suiting up in a Mets uniform for one more year," Cuddyer said. "As an athlete, retiring is the toughest decision you have to make and I don't make it lightly. I've always run out every hit like it was my last. As an untested high school kid drafted with a dream, I've never taken a single moment in the Majors for granted. It goes against every grain in my body to consider a future without the game. But after 15 years, the toll on my body has finally caught up to me."

Cuddyer, a two-time All-Star, was scheduled to earn $12.5 million next season, completing a two-year, $21 million deal. A team official would not comment on whether the Mets had bought out the remaining year, but that is expected to be the case.

"As everybody knows, Michael throughout his 15 Major League seasons has been a complete pro," Mets general manager Sandy Alderson said in a statement. "He embodies and defines what the word 'professional' means -- on and off the field.

"While battling injuries this past season, he was one of our team's true leaders in the clubhouse, playing a significant role in our National League Championship. He leaves an indelible, positive impact on our organization. We salute Michael on his career and thank him for his contributions to our success in 2015. We wish him, Claudia and their kids all the health and happiness."

Cuddyer signed with the Mets in November 2014 after turning down a qualifying offer from the Colorado Rockies. He justified the decision by saying he wanted to play with David Wright, a childhood friend and fellow Norfolk, Virginia, native. He also expressed a desire to play for a winner late in his career.

Cuddyer did achieve the latter objective. He reached the World Series with the Mets, although he went 1-for-11 in the postseason and 0-for-3 in Game 1, the only game he played in the World Series. Wright, however, missed four months of the regular season dealing with back woes, so their time together during the regular season was severely reduced.

Cuddyer underwent surgery in Philadelphia after the World Series to repair a core muscle injury.

"Over the last four years, I was on the disabled list six times," Cuddyer said. "I missed 150-200 games over that time span -- a broken shoulder, a strained oblique, a torn-up knee, a bulging disc in my neck. I pushed through it. Mentally, I was able to overcome it for a long time, but the physical and emotional taxation took its toll. Part of being a professional is to know yourself and to know your limits."

A first-round pick by the Minnesota Twins in 1997, Cuddyer played the first 11 seasons of his major league career with that organization. He went on to play for the Rockies for three seasons before joining the Mets.

He was credited by Norfolk natives with putting that area on the map for scouts. Ryan Zimmerman,Justin andMelvin Uptonand Wright subsequently became high draft picks out of that area.

"As hard as it is to retire, I know my family deserves to have me home full-time now," he said. "It is time for my kids to develop their own dreams with their dad by their side."