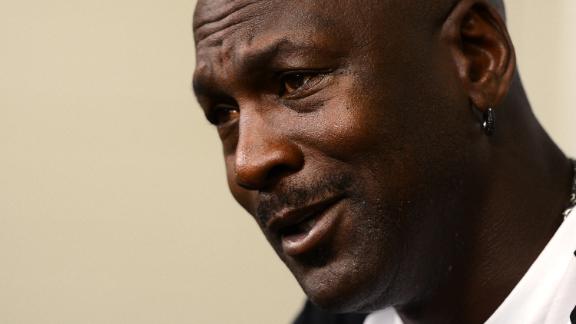 ESPN
CHARLOTTE, N.C. -- A humbled and emotional Michael Jordan fought back tears, feeling vindicated after years of criticism, after being named the Charlotte Business Journal's Business Person of the Year.

The Charlotte Hornets owner said during a nine-minute acceptance speech Tuesday night posted on the organization's website that while he's received many awards as a player, this one was different.

"I've been criticized in a lot of different areas from a business standpoint, but I take pride in the ideas and concepts and views that come out of this organization to build the type of basketball program ... that the city of Charlotte can be proud of," Jordan said as he began tearing up.

Jordan won six NBA titles as a player, but his front-office leadership abilities had been questioned -- including his decision to take Kwame Brown with the No. 1 pick of the 2001 NBA draft while an executive with the Washington Wizards.

But Jordan has repeatedly said he is committed to turning the Hornets around, and members of his team echoed his sentiments on Wednesday.

Charlotte president and COO Fred Whitfield said Wednesday that Jordan was "genuinely honored and humbled by the award."

Whitfield said Jordan has listened to fans, including changing the team's name back to the Hornets upon their request. The franchise had been known as the Bobcats.

"He is so proud to be building something in his home state," Whitfield said. "So to be recognized with such a prestigious award for his business accomplishments was really, really special to him."

Jordan's longtime business manager Estee Portnoy attended the ceremony and called the speech "genuine and beautiful" in an email to The Associated Press on Wednesday.

Jordan, a 14-time NBA All-Star who took over as the Hornets majority owner in 2010, said he plans on winning multiple championships with the franchise.

"For all of the people that think that I'm in this for the short term, you better pull your socks up and just hang around -- because my promise to this organization and this community is to bring a winner," Jordan said.

Jordan said when he joined the Hornets as a minority owner he never anticipated taking over as majority owner, but rather was interested in helping bring a winning franchise back to his home state.

But he said when Bob Johnson decided to sell the franchise, it felt like "karma" that allowed him the opportunity own a team in North Carolina.

"I left home. I came back home. And I plan on staying home," Jordan said.

Jordan, who grew up in Wilmington, North Carolina, talked at length how much of his family still lives in the state.

And he said he's still driven to win.

"Me, personally, I could ride off into the sunset and never worry about a thing," Jordan said. "But my pride brought me back to North Carolina for whatever reason."

Jordan, who won six NBA titles with the Chicago Bulls, went on to say "a lot of my credits from a basketball standpoint are going to be attributed to Chicago. But I'm from North Carolina."

Jordan also thanked his employees and his family for their input on his business decisions.

"I take input from all sources of this community be it from my family or be it from business leaders, be it from people walking in the streets," Jordan said. "And that gives me a sense of my pride in my connection to the community. I don't take that for granted. I take it with a lot of pride and a lot of respect."

The Hornets made the playoffs last season but were swept in the postseason by the Miami Heat.

They are currently ninth in the Eastern Conference standings this season.

"We still have a long ways to go as an organization," Jordan said. "We are just scratching the surface."