Mike Conley to play despite strain 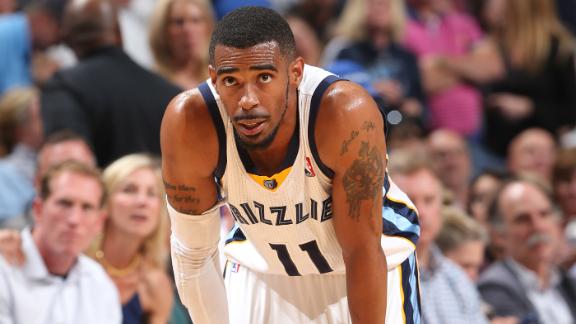 Conley, who first tweaked the hamstring during a regular-season game in Phoenix three weeks ago, pulled up lame in the third quarter of the Thunder's 100-84 Game 6 victory Thursday. He tried to return to the game in the fourth quarter but quickly shut it down so he could start treatment in the hopes of playing Saturday.

"You're not supposed to play through it, they say," Conley said. "I've got deaf ears right now. I'm going to get treatment on it and be as good as I can be."

Conley spent extended time getting treatment late Thursday and early Friday. He attended the team's practice but did not participate fully.

"I'm feeling sore, it's tight, but it's not as bad as I thought it would feel," Conley said. "It's very frustrating, I want to be there for my team."

The Thunder changed their starting lineup in Game 6 to apply pressure on Conley, replacing Thabo Sefolosha with Caron Butler to force Conley to work harder at the defensive end. Coach Scott Brooks said he'll keep the same starting lineup for Game 7, which means Conley will have to deal with a size mismatch while not being near top form.

The Grizzlies are thin at point guard because Conley's backup, Nick Calathes, is currently suspended. Beno Udrih is expected to get increased time. Udrih shot 11-of-14 in Games 2 and 3 but has fallen off, going just 5-of-19 over the past three games.

"I'm comfortable playing Beno more minutes," Grizzlies coach Dave Joerger said. "if I find matchups I'm comfortable with, I could play [Conley] and Beno together some."