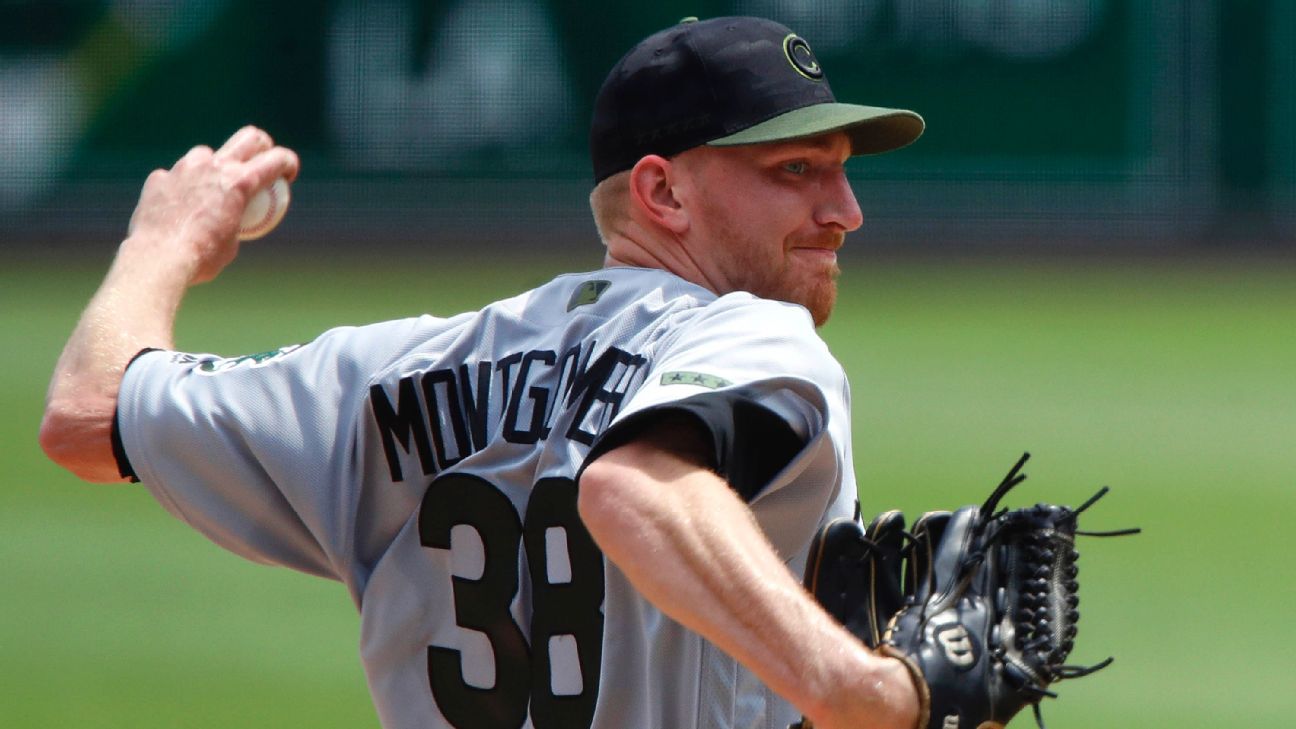 CHICAGO -- After so much bad news regarding their starting rotation lately, the Chicago Cubs got a boost in the form of 5 shutout innings from lefty Mike Montgomery in a 7-0 win over the Pittsburgh Pirates on Monday.

Inspired on Memorial Day by a cousin deployed with the Navy Seals, Montgomery made a loud statement to Cubs brass: He wants to be part of the starting staff, a position he's coveted for a while.

"I really enjoy starting," Montgomery said after the game. "The bullpen is fun in different ways."

Translation: Give me the ball again in five days. In fact, Montgomery wants the ball every five days, something he indicated during the offseason. He wasn't shy telling anyone who would ask that he wanted to be a full-time starter. Then he watched as the Cubs signed free agents Tyler Chatwood and Yu Darvish, pushing him back into the bullpen.

Fast forward to the present and Montgomery is likely to get another opportunity to start as the Cubs haven't even taken an MRI yet on Darvish, who was placed on the 10-day disabled list with right triceps tendinitis on Saturday. And why would they second guess themselves right now anyway? Any pitcher beyond Jon Lester and Kyle Hendricks who can throw some quality innings should get a chance.

"He was outstanding," manager Joe Maddon said of Montgomery. "I didn't expect that much length out of him. He kept getting better. Give the guy credit. That was above and beyond."

Montgomery gave up just two ground-ball hits, leaving before facing the Pirates a third time through the order. But there was no need to worry about the length of his start after he spent the first two months of the season in the bullpen. His 76 pitches on Monday were his most in an outing this year.

"My mindset was giving this team as [many] innings as we could get," Montgomery said. "I felt sharp. My changeup was really good today. It was as good as it's been all year. I was able to figure it out a couple innings in."

Montgomery's desire to provide some length wasn't just a cliché. He watched in his Pittsburgh hotel room as the Cubs played a 3 hour game on Sunday night against the San Francisco Giants at Wrigley Field. The bullpen was needed for 6 innings as Chatwood walked five in 2 innings. Hours later, Montgomery didn't issue a single free pass against the Pirates.

Simple is about the last word you would associate with Chatwood these days as nothing seems to come easy and his command issues are getting worse. Darvish also had a tough stretch before going on the DL for the second time this season, and Jose Quintana failed to finish five innings in his last outing. That's why Montgomery's performance was so big.

"When you get all five [starters] firing on the same path, that's when we can get really hot," Maddon said before the game. "It's hard to get on a really good roll without consistent starting pitching. We have it. It just hasn't shown itself consistently yet, but I believe it will."

When that day comes, will Montgomery be part of the rotation? Maddon tempered the excitement a little, but he understands Cubs fans who long for some consistency from their starters.

"Too many times everybody gets too excited over something good and too despondent over something that doesn't appear so good," Maddon said. "It's not even June. He did great today. You like to see that kind of an effort or performance over a period of time and not just sporadically."

There's nothing wrong with that kind of thinking as production over time should rule the day. But based on recent trends, Montgomery can't be worse than any of the other three starters who have struggled. That point is moot anyway. He'll start at least until Darvish is healthy again. Then the Cubs can reassess. For now, they can celebrate the boost they got in their rotation. They needed it.

"I'll be ready," Montgomery said of his next assignment. "I'll prepare accordingly. I feel good from a physical standpoint. I keep the mindset of always going out there and proving something."