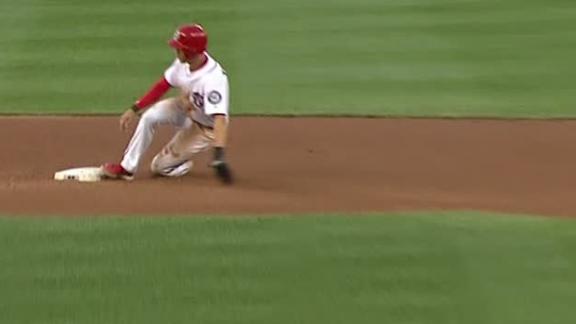 WASHINGTON -- The Washington Nationals stole a team-record seven bases Tuesday night in a 6-1 victory over the visiting Chicago Cubs and their beleaguered catcher, Miguel Montero.

The seven steals are the most the Nationals have ever tallied in a single game since moving to D.C. in 2005, and are tied for the franchise record, most recently accomplished by the Montreal Expos on May 7, 1986.

The seven steals off Montero means the Cubs are now 1-for-32 (3 percent) this season throwing out would-be base stealers. Montero, who also made a throwing error in the game, is on pace for the lowest caught-stealing percentage (minimum 25 attempts) for a Cubs catcher since at least 1969.

Leading Washington's charge on the basepaths was speedster Trea Turner, who beat out an infield single to start the game against Cubs starter Jake Arrieta, then promptly stole second and third before scoring on an infield single by Brian Goodwin.

Turner walked in his next plate appearance in the third inning, once again stole second and third, then scored when Daniel Murphy reached on an error.

Turner's four thefts tied a franchise record for most steals in a game, most recently accomplished by Turner himself on June 18 against the Mets. The 24-year-old shortstop now leads the majors with 32 stolen bases on the season. Center fielder Michael A. Taylor added two steals for Washington, and third baseman Anthony Rendon had one. On the season, the first-place Nationals rank third in the National League with 59 stolen bases.

Nationals swipe 7 bases against Cubs
The Nationals combine for seven stolen bases against the Cubs with Trea Turner getting four of them. The last time the franchise swiped seven in a game was 1986 when they were the Expos.
Report a correction or typo
Related topics:
sportsespnmiguel monteronatsmlbteam recordexposstolen basestrea turnerwashington nationalschicago cubs
Copyright © 2020 ESPN Internet Ventures. All rights reserved.
More Videos
From CNN Newsource affiliates
TOP STORIES