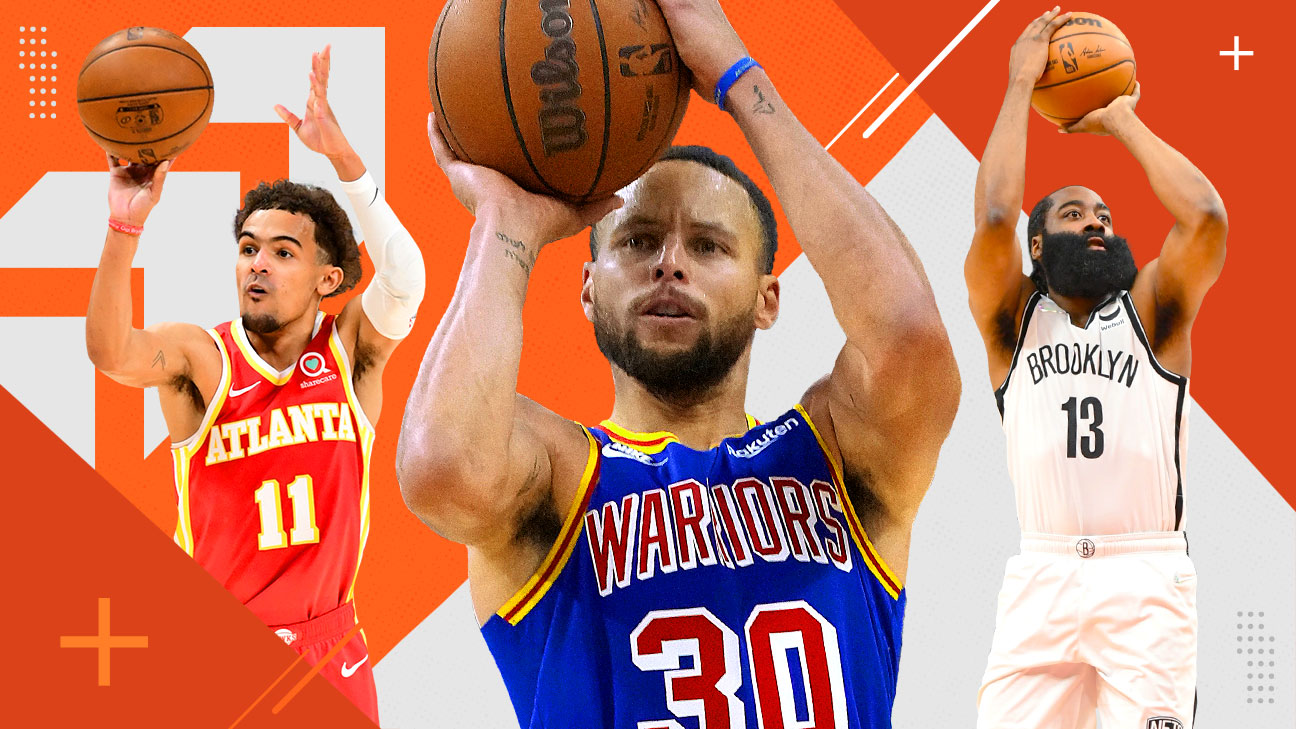 Which players are on pace to become their teams' leader in 3s? Which franchises' marks could be untouchable? Which Hall of Famers are next to get passed on the all-time list?


As for our latest rankings, the league has a new No. 1 team: the Phoenix Suns, who enter this week with the NBA's best record at 21-4, following the Warriors' loss Saturday night against the Philadelphia 76ers. Phoenix has won 20 of its past 21 games and leads a trio of teams -- Golden State and the Utah Jazz are the others -- that have separated themselves from the pack in the Western Conference.

In the Eastern Conference, the Brooklyn Nets still lead, but the defending champion Milwaukee Bucks are right on their heels. Giannis Antetokounmpo & Co. have won 12 of their past 14 contests.

Note:Throughout the regular season, our panel (Tim Bontemps, Jamal Collier, Nick Friedell, Andrew Lopez, Tim MacMahon, Dave McMenamin and Ohm Youngmisuk) is ranking all 30 teams from top to bottom, taking stock of which teams are playing the best basketball now and which teams are looking most like title contenders. Stats provided by ESPN Stats & Information research.

While it's unlikely to happen by the end of this season, Devin Booker is on pace to become the Suns' career leader in 3-point field goals by the finish of the 2022-23 season. Booker, who passed Dan Majerle for second place on the list in the Suns' third game of the season, is still 206 behind Steve Nash for the top spot. -- Lopez

Steph Curry is seven 3s away from eclipsing Ray Allen's all-time 3-point record. Klay Thompson is expected back in the next few weeks after 2 years away. The ongoing surprise for the Warriors is the continued improvement of guard Jordan Poole. The University of Michigan product is shooting 42.7% from beyond the arc over his past 10 games and is averaging 19.3 points over that stretch while filling in for Thompson. -- Friedell

Joe Ingles broke John Stockton's all-time franchise record for 3s made last season, but Ingles is probably just keeping the spot warm for Donovan Mitchell. Ingles has made 1,045 3s in his career, all in a Jazz uniform, only 237 more than Mitchell. Mitchell (82 3s this season) also is on pace to shatter Utah's single-season record for 3s, a mark set by Jordan Clarkson (208) last season.-- MacMahon

There's understandably been plenty of attention paid to Stephen Curry's pursuit of the all-time record, but James Harden isn't far behind him. Harden is 51 treys behind Reggie Miller for third all time, a milestone he should lock up before the All-Star break.-- Bontemps

Ray Allen already had one of his 3-point records broken earlier in the season, when Khris Middleton broke his Bucks franchise record for most made 3-pointers. Allen did it in fewer games (494) than Middleton (566), but that didn't take away from the accomplishment of moving past one of the all-time great sharpshooters. "To be able to break a record like that is something you definitely think of as a kid," Middleton said after passing Allen. "Now, it's just keep trying to expand on that list or move up on the NBA list."-- Collier

The Heat are giving up 13.7 3s a game, which puts them on pace for their third straight season of yielding at least 13 3-pointers per contest. Prior to the 2017-18 season, they hadn't given up an average of more than nine per game.-- Friedell

It's only Zach LaVine's fifth season with the Chicago Bulls, but earlier this year, he passed Michael Jordan (555) on the franchise's all-time 3-point list. If LaVine (625 career 3s with the Bulls) produces similar numbers from beyond the arc as compared to the past three seasons, he will pass Scottie Pippen (664) to move up to third on the franchise's all-time list. But LaVine has a ways to go to get to Kirk Hinrich's all-time mark.-- Collier

Stephen Curry is set to become the NBA's all-time 3-point leader, but he isn't the best shooter -- by percentage, anyway -- in his own family. Seth Curry is a career 44% shooter from deep as compared to 43.2% for his older brother.-- Bontemps

Second-year wing Desmond Bane (71 3s this season) might end up rewriting Memphis' 3-point record book. He is on pace to break Mike Miller's mark for most 3s made in a season (202). Bane has already established himself as a core player for the Grizzlies, so he'll likely spend several seasons in Memphis. That makes Bane, who has shot 42% from deep in 94 career games, a threat to break Mike Conley's career team record. -- MacMahon

Cleveland, the biggest surprise success story of the NBA season, is averaging 12 3s per game, which puts it 16th in the league. To put that in perspective, the Cavs team that won the championship in 2016 only averaged 10.7 3s per game in the regular season en route to the only title in franchise history.-- McMenamin

There might be fewer 3-pointers hoisted in upcoming Wizards games. Kyle Kuzma, who led the team in getting up 5.8 3-point attempts per game and recently made the game-winner against Detroit, entered health and safety protocols on Saturday. The Wizards already average the fewest 3-pointers made per game (10.1) in the league, but Wes Unseld Jr.'s defense also is allowing a league-low 10.2 3-pointers per game this season.-- Youngmisuk

Paul George missed two games last week due to an elbow injury, but the Clippers were still able to put together a three-game winning streak due to big games from Brandon Boston Jr. and Reggie Jackson. Prior to George's absence, the Clippers' star swingman was averaging 3.1 made 3-pointers per game. That is on pace to break Eric Piatkowski's franchise record sometime next season in what will be George's fourth campaign with the Clippers.-- Youngmisuk

LeBron James has come on as a 3-point shooter late in his career, so much so that with 2,023 makes, James is knocking on the door for top 10 all time in the category. James is 11th, 86 makes behind Damian Lillard and in range of old nemesis Paul Pierce, who is ninth with 2,143.-- McMenamin

Kelly Oubre Jr.is averaging 26.4 points a game so far this month and has provided offensive stability for a Charlotte team that has been dealing with several COVID-19 protocol-related absences. The difference for Oubre this season is that he has been much better from long range. Oubre is shooting 38.6% from deep with the Hornets as compared to the ice-cold 31.6% he shot last season with the Warriors.-- Friedell

It still remains to be seen when Jamal Murray will return from his ACL surgery, but he continues to rehab and shoot. When the Nuggets star point guard is back, he will resume his pursuit of becoming the franchise's all-time 3-point shooter. While Will Barton passed Murray for second on the team's list earlier this season, Murray is 96 treys away from breaking JR Smith's team record.-- Youngmisuk

Both Jayson Tatum (fifth) and Marcus Smart (fourth) have a chance to move past Ray Allen on Boston's all-time 3-point makes list -- with Tatum, currently 42 behind Smart, likely to wind up ahead of both of them by season's end.-- Bontemps

Here's a rarity: The Mavs' single-season record for made 3s was set before the turn of the century. George McCloud still holds it with the 257 that he hit in 1995-96, when only four players in the league made more than 200 3s. Tim Hardaway Jr. is the only other player in franchise history to hit more than 200 3s in a season, having done it twice. -- MacMahon

Fred VanVleet (632) should pass Morris Peterson for second on Toronto's all-time list this season, but VanVleet is still not going to be anywhere near Kyle Lowry's franchise record.-- Bontemps


Karl-Anthony Towns has already made his stamp in Minnesota's record book, holding the top mark for 3-point attempts and makes in Timberwolves history, despite ranking only seventh in games played. Interestingly, second-year forward Anthony Edwards is already in the team's top 10 in 3-point attempts, a sign of the modern NBA. -- Collier

New York has struggled defensively -- an oddity for a Tom Thibodeau team -- and opponent 3-point shooting is playing a part, as the Knicks are among the bottom 10 teams in the league in opposing 3-pointers made and attempted this season.-- Bontemps

Damian Lillard missed five straight games due to a lower abdominal injury before returning on Sunday. The Blazers desperately needed him after losing CJ McCollum indefinitely with a collapsed lung. Portland's season has been a mess so far, but a healthier Lillard could soon surpass a Hall of Famer on the all-time 3-pointers list: After Sunday, he is 35 3s away from eclipsing Paul Pierce for ninth place.-- Youngmisuk

How much has the league changed in the past decade or so? The Spurs are last this season with 29.0 3-point attempts per game. They also were last a season ago with 28.4 attempts. Both numbers would have led by a wide margin over the Rockets' league-leading 26.6 attempts from the 2013-14 season.-- Lopez

Reggie Miller's franchise mark is in no danger of falling. Indiana's closest active threat is Myles Turner, who currently sits 2,180 3-pointers from passing the Hall of Fame sharpshooter.-- Collier

Peja Stojakovic was a member of the Kings' front office when Sacramento traded with New Orleans for Buddy Hield during his rookie campaign in 2017. Five seasons later, Hield surpassed Stojakovic -- who has since stepped down as the Kings' assistant general manager -- as the franchise's all-time leader in 3-point makes in his time with the Kings.-- McMenamin

James Harden might hold Houston's career 3-point record forever. "The Beard," whose step-back 3 became one of the league's most lethal weapons during his Houston tenure, made more than 2,000 3s in a Rockets uniform. Eric Gordon ranks second with 896.-- MacMahon

Pelicans center Jonas Valanciunas is shooting 46.3% on 3-pointers this season. If he holds that percentage for the rest of the season, it would be the highest for a player listed at 6-foot-11 or taller for an NBA season that qualifies for the league lead. The current best mark is held by Troy Murphy, who hit 45% of his 3-pointers for Indiana in the 2008-09 season.-- Lopez

The Thunder are allowing 14.6 made 3s per game, which is on pace to be the second most in NBA history for a season, according to ESPN Stats & Information data. Oklahoma City also ranks last in the league in 3-point percentage (.307). That's the kind of combination likely to lead to a high lottery pick. -- MacMahon

Cole Anthony's improved play this season is due in part to his solid long-range shooting. The second-year guard came into Sunday's contest shooting 41.7% from beyond the arc this month, and he continues to look more comfortable on the floor for the rebuilding team. After shooting 33.7% from distance last season, Anthony has kicked that up to 37.7% so far this campaign.-- Friedell

The Pistons have been an abysmal 3-point shooting team this season. They rank 29th in the NBA in 3-point percentage, barely ahead of the Thunder for last in the league, and the Pistons already set a record for futility earlier this season. Detroit went 8-for-47 (17%) from 3 during a game against the Bucks; no other team in NBA history has shot so many 3s while making so few.-- Collier 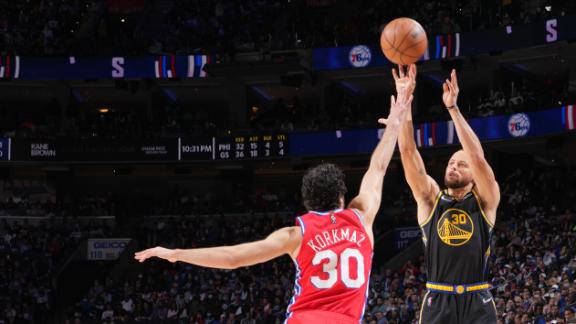