1 / 5
Los Angeles Clippers forward Matt Barnes.
AP
An arrest was made today in the killing of NBA star Matt Barnes' aunt. And it's likely that Twitter and Instagram had a role to play in capturing the primary suspect, Michael Williams. In a tweet, Sacramento Police wrote "Michael Williams, suspect in the 24th street homicide, is in police custody thanks to a citizen tip. He was located in the Sacramento area."

On July 8th, Barnes' aunt Tanganyika Williams was stabbed to death in Sacramento, CA. Distraught but determined, Barnes reached out to his social media following to help catch his suspected aunt's killer.

In the gallery above, Barnes reaches out to his Twitter and Instagram followers, providing a photo of the murder's primary suspect Michael Williams, and contact information on how to reach him. The response was overflowing, with many of Barnes' fans offering their love and support in his hard time.

The post has reached other powerful Twitter users as well. Actress Gabrielle Union reached out to her Twitter following of 2.5 million to spread the word about Barnes' aunt's killer. 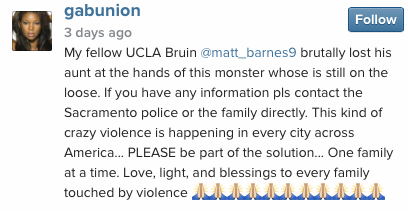