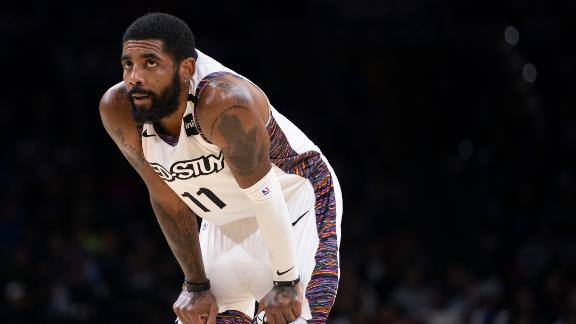 Spencer Dinwiddie and Kyrie Irving found some normalcy while coping with Kobe Bryant's death when they led the Brooklyn Nets to a 10-point win over the Detroit Pistons on Wednesday.

On Friday, the Nets will attempt to get consecutive wins for the second time this month when they host the Chicago Bulls.

The Nets beat Miami and Atlanta on Jan. 10 and 12, respectively. Before those wins, they had not won consecutive games since a 20-point home win over Philadelphia on Dec. 15 and overtime win in New Orleans on Dec. 17, and those wins were part of a 10-4 stretch that gave the Nets a 15-12 record.

Since then, Brooklyn is 5-14 in its past 19 games and hoping to follow up one of its better performances of late after its 125-115 home win over the Pistons. On Wednesday, Dinwiddie, who grew up in Los Angeles, scored 28 points in a reserve role while Irving added 20 after sitting out Sunday's loss to the New York Knicks.

"I couldn't even come up with wanting to play that game," Irving said. "It was so heartbreaking, and it still is. I'm doing my best."

Irving practiced Tuesday before playing Wednesday. Dinwiddie played his third game since being moved back to the bench for Saturday's win in Detroit and scored his second-highest total as a reserve while wearing No. 26 instead of No. 8, which he retired in honor of Bryant.

"I think I had still the had the emotion but I'm not going to put all that on this situation," Dinwiddie said. "Our goal of our team is just to come together and try to progress throughout the season."

Chicago heads to Brooklyn in ninth place in the Eastern Conference, three games behind the Nets. They are 6-5 since a six-game losing streak from Dec. 30-Jan. 10.

On Wednesday, Chicago was unable to win three straight games for the first time this season when it took a 115-106 overtime loss in Indiana. The Bulls went scoreless in the final 4:14 of the fourth quarter, squandering a seven-point lead, and were outscored 15-6 in overtime.

"It's been the same thing all year," Bulls guard Zach LaVine said. "We're a really good team. We compete with the best teams. We've seen that. We've had teams with winning records where we had control of the game and then lose at the end. Good teams win at the end. We haven't figured out how to do that. I'm not questioning our talent or how good we are individually. But as a team, we don't know how to win."

LaVine scored 20 points and has at least 20 points in 16 straight games, a stretch that includes a 44-point game at Cleveland on Saturday, a 42-point game also against the Cavaliers on Jan. 18, and a 43-point game against Indiana on Jan. 10.

The Nets are 7-1 in the past eight meetings with Chicago. Brooklyn won the first meeting this season, 117-111, on Nov. 16 in Chicago. Dinwiddie scored 24 points to lead Brooklyn.

Up and down moments from Kyrie's first season in Brooklyn
Kyrie Irving made waves when he said the Nets needed more pieces, which led to some scrutiny from several ESPN personalities.
Report a correction or typo
Related topics:
sportsespnchicago bullsnbabrooklyn nets
Copyright © 2020 ESPN Internet Ventures. All rights reserved.
More Videos
From CNN Newsource affiliates
TOP STORIES