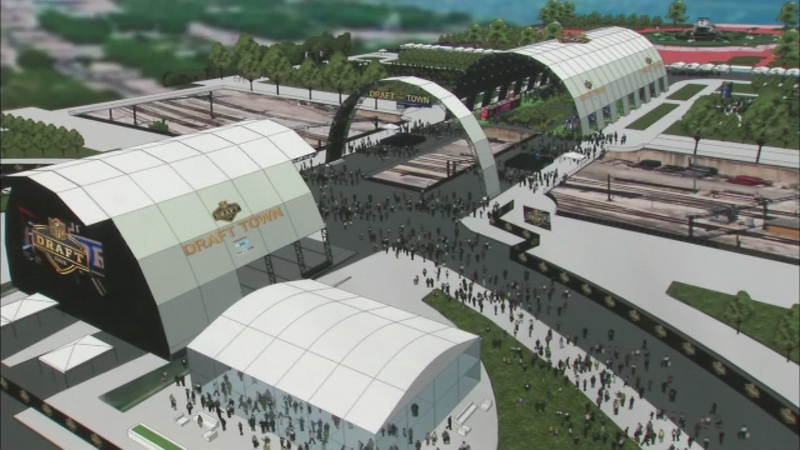 CHICAGO (WLS) -- The NFL Draft is a little more than two weeks away, and the league is giving ABC7 a look at how the preparations are progressing.

Usually the NFL Draft is a closed events; free, but only available to those lucky enough to get tickets. Not so in 2015. After 51 years in New York, it will be Chicago's turn to host the event and, for the first time, fans will be able to experience the draft in a way never before possible.

"In New York we had a great experience in Radio City Music Hall, but we never had the opportunity to have a beautiful park like Grant Park," said Peter O'Reilly of the NFL.

While the actual picks will be announced inside the Auditorium Theatre in a closed, ticketed event, the NFL intends to transform a large part of Grant Park into a free, three-day fan festival

"It will allow thousands and thousands of fans to experience the draft in person," O'Reilly said, "not just viewing it on screens but meeting legends, being at interactive events, running the 40, having great food."

A Super Bowl Museum and team houses where fans of all 32 teams can come together and mingle will all be part of Draft Town. Finally, there is Selection Square. Set in Congress Circle, that is where another 1,000 fans lucky enough to get tickets will be able to watch the actual operations of the draft as the team tables call their selections into the theatre.

From a tourism and exposure perspective, hosting the draft is a big deal for Chicago.

"It's going to be a huge opportunity for the city," says Don Welsh, president and CEO of Choose Chicago. "When you start thinking about the fact that 50-plus-million people watch the NFL draft, probably outside the Super bowl it's one of the biggest events the NFL does."

The NFL has partnered with the same company that produces Lollapalooza every summer. The NFL Draft will take place April 30 - May 2.