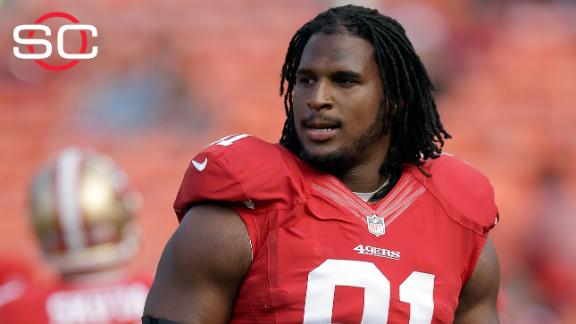 ESPN
NFL officials said Friday they have informed Chicago Bears defensive end Ray McDonald that he won't be disciplined by the league for a domestic violence incident that occurred at his San Jose, California, home last year.

''We have completed that [domestic violence] investigation,'' NFL general counsel Jeff Pash told the Associated Press Sports Editors, as quoted inthe Chicago Sun-Times. ''[NFL special counsel for investigations] Lisa [Friel] and her team completed that investigation [and] did not establish a violation of the personal conduct policy. We informed the player and the [NFL] Players Association.''

Pash said the league informed the formerSan Francisco 49erslineman of its ruling a few weeks ago.

McDonald was arrested Aug. 31 on suspicion of domestic violence while celebrating his 30th birthday at his home with teammates and friends. Santa Clara (Calif.) County prosecutors announced in November that they had insufficient evidence to charge McDonald. They cited conflicting versions of what happened, a lack of verifiable eyewitnesses and a lack of cooperation by the alleged victim, McDonald's fiancee.

The arrest came only days after NFL commissioner Roger Goodell announced stiffer penalties for players accused of domestic violence, including a six-week suspension for a first offense and at least a year for a second. That move followed scrutiny over former Baltimore Ravens running back Ray Rice's two-game penalty stemming from his arrest on an assault charge in February 2014.

The league confirmed a separate investigation is ongoing involving McDonald, who is accused of a sexual assault that police say occurred Dec. 14 in his San Jose house. According to court documents, a woman alleges McDonald sexually assaulted her after a night of drinking and after she injured her head in a fall by his swimming pool. The court papers quote McDonald as saying in a text message that he believed the encounter was consensual.

No charges have been filed, and the San Jose police continue to investigate.

''Just to be clear, Ray McDonald had two issues, as you may remember -- one related to a domestic violence incident and one related to an alleged sexual assault,'' said Friel, the former head of the Sex Crimes Prosecution Unit in New York County District Attorney's Office for more than a decade. ''It's the domestic violence incident that we have finished investigating and didn't find sufficient evidence to say that he violated the personal conduct policy."

McDonald was signed by the Bears to a one-year contract after being released by the 49ers in December.