NHL Playoffs Daily 2020: Rangers out, Islanders one win away from moving on

And on the fourth day of bubble hockey, we got a very pretty pass, a fake punch ... and a sweep. Send some congrats to the Carolina Hurricanes, the first team to qualify for the next round. The Canes also get up to a week's rest before the next round begins. What a treat.

Check out the ESPN Stanley Cup Playoffs Daily every day of the postseason until the Cup is handed out in October. Let's get started on Wednesday.

The Panthers advanced to the Stanley Cup Final in 1996, but they're 0-4 in playoff series since. Things aren't looking great for Joel Quenneville's squad, one loss away from making it 0-5. The coach is likely sticking with goalie Sergei Bobrovsky for Game 3; at this point, you have to stick with the $10 million-a-year man (and he did play well in Game 1). Let's also praise the Isles for a second. Their offense looked ... surprisingly dangerous in Game 2. I could get used to watching that this summer.

The Predators are attempting to do something they've never done: win a playoff series after losing Game 1. They're 0-10 in such situations, but find themselves in a decent position this year, thanks to a clinic in shot-blocking in Game 2 (they combined for 21 as a team). As for the Yotes? They'll need to find shooting lanes. Taylor Hall is going to come into this game fired up after sitting for eight penalty minutes on Tuesday.

A streaking Nikita Kucherov is a scary thing, and the sniper scored in regulation, and notched the shootout winner against the Capitals. The Lightning have looked mighty strong both in their exhibition and their first round-robin game. The Bruins can't really say the same. They looked flat in their two contests in the bubble, and it already sounds like coach Bruce Cassidy is thinking of shaking up his lines. Jack Studnicka, the Bruins' promising 21-year-old prospect, is likely getting scratched as Nick Ritchie makes his return.

The Stars' offense looked great against the Vegas Golden Knights on Monday, but their usually stingy defense crumbled in a third-period collapse. The Stars' zone exits were particularly troublesome. Hey, it's only the round robin, but they'll want to clean that up. As for the Avalanche? The Stanley Cup chatter seems to be growing for this group. They're coming in with swagger after Nazem Kadri's buzzer-beater. Facing the Stars will be a good test, as Colorado went 0-2-2 against Dallas this season.

So the Penguins got a big scare in Game 1 as they lost to the Habs in overtime. There's reason to believe in Pittsburgh, especially with the way the team rebounded in Game 2. Sidney Crosby and Evgeni Malkin both look super motivated, which often means danger for opponents. The 12th-seeded Habs are showing they won't be an easy out. Coach Claude Julien has hinted at some lineup tweaks for this pivotal game. One player who is not leaving the lineup: rookie Jesperi Kotkaniemi. The 2018 first-round pick has played with confidence, a great sign for Montreal's future.

When Stars goalie Ben Bishop appeared on the ESPN on Ice podcast with Greg Wyshynski and me on Tuesday, he told us this was the series he was most looking forward to, because he knew it was going to provide fireworks. It certainly has, as neither team has put on strong displays of defense or goaltending. The Blackhawks probably aren't going to slow down Connor McDavid when he's on a tear like this, but they can work on their own puck possession. (It's hard for McDavid to score when he doesn't have the puck!)

It was all about the offense, and all about the second period for the Islanders. New York scored three goals in the second, tying its season-high for most goals in the frame. Two goals by Jordan Eberle were quite nice. The Panthers are now fighting for their postseason lives, and it's not a great situation if you zoom out and think big picture. The team splurged this summer like it never had before, including for a coach who won three Stanley Cups and a goalie who won two Vezina Trophies. It's not supposed to end this quietly.Full recap.

This score looks a bit more respectable than it was; the Predators led 4-0, but the Yotes scored two late goals to at least feign competitiveness. It was a bit of a fluky game. Arizona led in shots 14-5 through the first period, but was down 2-0. The Yotes couldn't turn to Antti Raanta, as he was deemed unfit to play after warm-ups. Let's toast Juuse Saros for Nashville. The goaltender played eight playoff games before winning his first. According to Elias, Saros is tied for the third-most playoff games played before his first playoff win.Full recap.

The first half of this game was all about Joonas Korpisalo. The goaltender, a longtime backup to Bobrovsky, finally got his chance to shine this postseason. The Leafs came in hot and Korpisalo turned away everything; he looked unstoppable. Finally,Auston Matthews broke through. The Blue Jackets couldn't muster any offense themselves. A scary situation unfolded late as Maple Leafs defenseman Jake Muzzin had to be taken off in a stretcher after an awkward fall. Muzzin was taken to a local hospital, where he is alert and able to move all his limbs, according to the team.Full recap.

In Game 2, it felt like Calgary took the Jets for granted. Winnipeg was without its two best forwards, Mark Scheifele and Patrik Laine, and maybe the Flames thought that Winnipeg would lay down easy. Not so. In Game 3, the Flames brought the heat. This game featured a lot of goals and a lot of hits. Vezina finalist (and likely winner) Connor Hellebuyck wasn't at his best, but the Flames should worry after hearing this postgame quote: "I plan on using this. This was an upset for me tonight. I don't see it being easy for them -- at all -- for the rest of the series. They better scratch and claw for everything they can get."Full recap.

Both teams started different goalies. Igor Shesterkin was finally fit to play, and he got the nod for the Rangers. Meanwhile, Carolina coach Rod Brind'Amour made the interesting choice to start James Reimer-- despite Petr Mrazek playing very well through two games -- so that both of his netminders could stay fresh. Both Shesterkin and Reimer made some exceptional saves. I'll be thinking about this one from Reimer for a while.

In this series loss, the Rangers' biggest flaws haunted them. Their defense had lapses, making them too reliant on goaltending. They were also too dependent on Artemi Panarin and Mika Zibanejad for offense, and neither player had a particularly good series. The Canes, meanwhile, got eight of their 11 goals from their top line.Full recap.

The Vancouver offense woke up after a frustrating Game 1. The top six was especially good, and it was fun to watch Minnesota native Brock Boeser get his first postseason goal against his hometown team. (Boeser was pumped!) The Wild had plenty of chances, but whiffed 0-for-6 on the power play. Luke Kunin's short-handed goal was nice, but Minnesota didn't really come alive until late in the third period when Kevin Fiala stayed hot with two tallies. By that point, time had run out to mount a full comeback.Full recap.

The Canes were the first team to punch their ticket to the next round. Aho had two goals and an assist in the deciding Game 3, including this absolute beauty:

Eberle did not score a goal in his 13 games with the Oilers in the 2017 Stanley Cup playoffs, but he has been on fire with the Isles, scoring six goals in his first 10 postseason games with New York, including two on Tuesday.

It's rare to feature a losing goaltender here, but the only reason Columbus had any chance in this game was because of an incredible performance from their goalie. Korpisalo turned away 36 of 38 shots and extended his shutout streak from Game 1 to an impressive 96 minutes, with 56 consecutive saves.

Apple of the day

The Winnipeg Jets may have lost, but this stretch pass from Dmitry Kulikov to set up a streaking Nikolaj Ehlers in Game 3 was the prettiest assist I've seen in this tournament.

Outfit of the day

William Nylander has entered the chat.

This is both petty and amazing.

Mismatch of the day

Panthers forward Brian Boyle may have the advantage in size (6-foot-7 vs. 5-10) and experience (805 career games against 435) over the Isles' Jean-Gabriel Pageau, but that fake punch is just chef's kiss:

"Toronto was really good, we sucked." -- Phrase repeated by Columbus coach John Tortorella again and again (and again) during his postgame news conference. 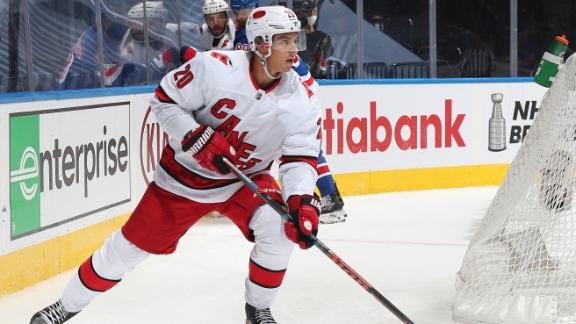 Aho scores twice as Hurricanes sweep Rangers
Sebastian Aho scores two goals in the third period to lead the Hurricanes to a 4-1 win over the Rangers. 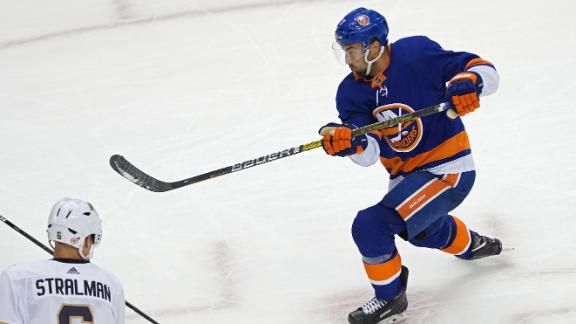