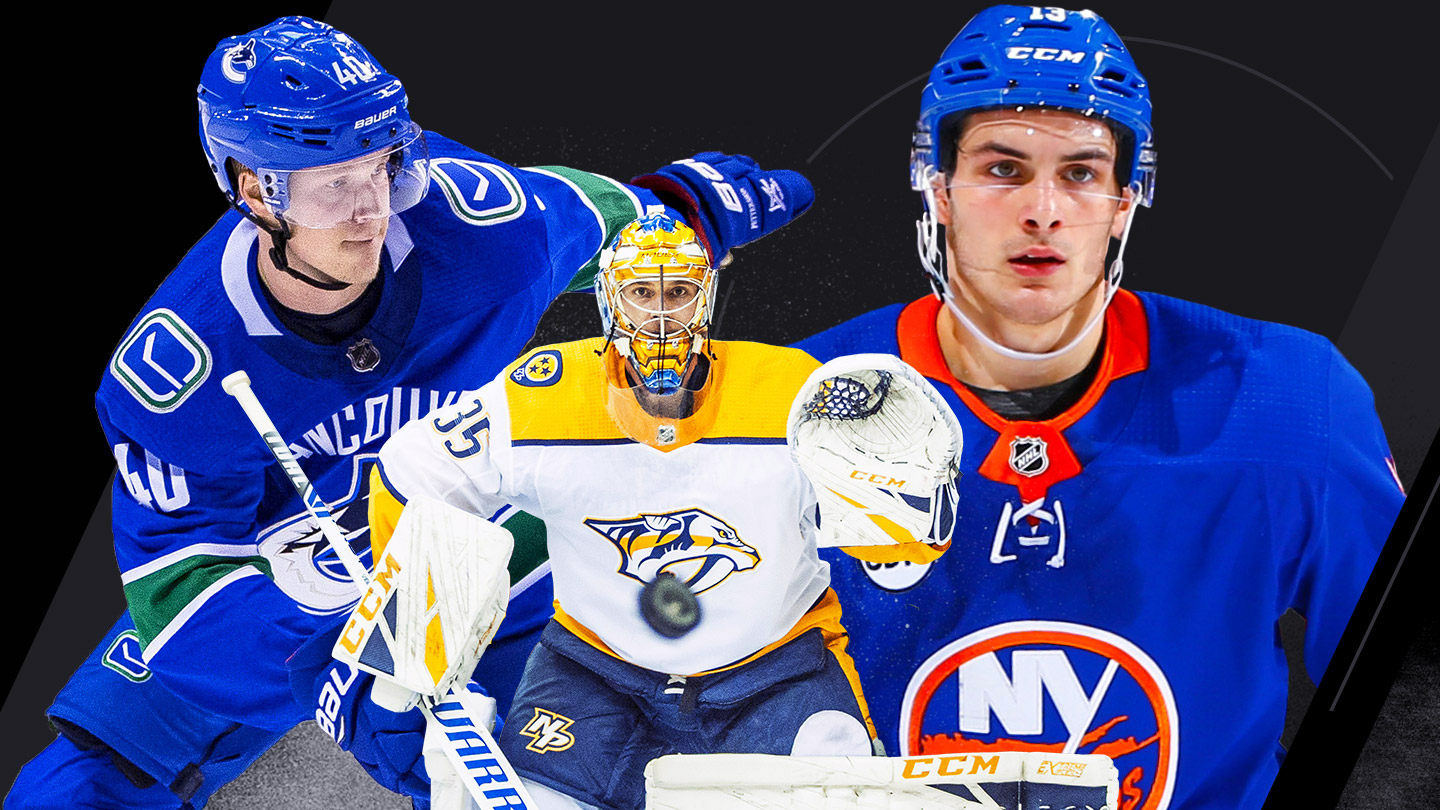 The NHL's All-Star Weekend is upon us once again, with the festivities taking place in lovely San Jose. Say what you will about the event and its virtues -- maybe you think it's a giant waste of time, or maybe you think it's a wonderful display of player aptitude and personality -- but the annual cavalcade of stars always manages to squeeze out a memorable moment or two.

For this week's power rankings, we're looking at some of the most memorable moments for the 31 teams at the All-Star Game or Skills Competition.

Steven Stamkos wins the 2012 Elimination Shootout. The what now? This was the event in which individual scorers tried to score on a breakaway against an opposing goalie. Shooters who scored stayed alive until there was one shooter left. Stamkos won the 2012 edition in Ottawa. There hasn't been another version of the event. Hence, Stamkos will forever be known as the Grand Elimination Challenge Undisputed Universal Champion.

Johnny Gaudreau wanted to light his stick on fire. With due respect to all of the players in Flames history who actually accomplished things at the NHL All-Star Game, we have to take this moment to acknowledge something that didn't happen: Flames rookie Johnny Gaudreau in 2015, getting rebuffed by NHL lawyers after seeking permission to light his stick on fire during the skills competition. "Since we played for the Flames, I want to light it on fire," Gaudreau said at the game. "I think it was a player safety concern. I really don't know exactly why."

Owen Nolan calls his shot in 1997. The Sharks winger, in San Jose no less, completes a hat trick on a breakaway after pointing at the goalie from the top of the circles to "call" where he was putting the puck. That goalie? Dominik Hasek! Wow.

Mike Bossy wins 1982 MVP. Sometimes, these All-Star Games can be a little dramatic. Witness the 1982 game between the Wales Conference and the Campbell Conference, which was 2-2 in the second period after a Wayne Gretzky goal. Enter Bossy, who scored at 17:10 to give the Wales team the lead and iced the game in the third period with another goal to win MVP. Something nutty: The game was held in Landover, Maryland, and Gretzky and the rest of the All-Stars had lunch with President Ronald Reagan at the White House the day before the game.

Let's call it a tie: Shea Weber's booming hardest-shot competition entry at 108.5 mph, just 0.03 offZdeno Chara's record, and the way the Nashville fans made the 2016 John Scott phenomenon such an incredible, heartfelt moment in NHL history.

Vincent Damphousse wins the 1991 MVP. The scoring center spent his first five seasons with the Leafs, including the 1990-91 season, when he was a minus-31. (Ouch.) But he was an All-Star that season in the game held in Chicago, and he played like one: Damphousse scored four goals to tie a record shared by Gretzky and Mario Lemieux. The game was notable for being held during the Gulf War. Players wanted it canceled. The Chicago fans were deafening during the U.S. anthem.

Marc-Andre Fleury wins the save streak. Sure, the Knights have had just one season of existence, but they still have an All-Star Game highlight: Fleury stopping 14 straight shots to win the inaugural edition of the NHL "Save Streak" challenge at the All-Star Game in Tampa.

When Sidney Crosby started actually showing up to play. Kidding! Of course it's Mario Lemieux's incredible, six-point effort in the 1988 event in St. Louis, culminating in the overtime game winner for the Wales Conference and, at the time, a single-game points record in the event.

Zdeno Characranks a shot at 108.8 miles per hour in 2012. The towering Bruins defenseman is a five-time winner of the hardest shot competition. This was his last win in his old haunt of Ottawa, and it remains the NHL record in the competition. Shea Weber just missed the mark the following year, hitting 108.5.

Alex Ovechkin takes a picture of sad, last-picked Phil Kessel at the 2011 NHL Fantasy Draft. Now, this could have been a spot to honor Ovechkin's prop comedy skills, competition goals or even old-school Capitals such asMike Gartner and Peter Bondra (fastest skater) or Al Iafrate (hardest shot) winning their skills competitions. But Ovechkin's "mockery" of the last pick started the Phil Kessel Redemption Society and exposed the cruel underbelly of the fantasy draft format that we all loved but the players loathed.

Alexei Kovalev wins the MVP at Bell Centre. The Canadiens' offensive dynamo had a heck of an entertaining week, playing the puck off his head in the breakaway challenge, scoring two goals and an assist in the All-Star Game and scoring one more in the shootout to lead his team to victory. He was voted in by the fans and vowed to wow them as team captain. For winning MVP, he won a car.

Jamie Benn gets accurate. The Stars winger won the 2012 shot accuracy competition in 10.204 seconds, which remains the second-fastest time since the format of the event was changed in 2011.

Marian Gaborik wins fastest skater in 2003. Once called a "Maserati on the Autobahn" by Sports Illustrated, the Wild winger won the speedskating event at the All-Star Game in Sunrise, Florida. He later won All-Star Game MVP in 2012 as a member of the Rangers. Honorable mention: defenseman Filip Kuba getting the only All-Star Game selection of his career (333 points in 836 games) because the Wild hosted the 2004 event.

Joe Sakic wins 2004 All-Star MVP. The Hall of Fame center won most valuable player in a losing effort, scoring three of the Western Conference's four goals for an All-Star Game hat trick. (For the record, please note that these All-Star jerseys were incredible.)

Zemgus Girgensons makes the 2015 All-Star Game. Before there was John Scott, there was Zemgus Girgensons, the Buffalo forward who to this date has yet to score more than 30 points in a season. But the NHL's online voting allowed fans in his native home of Latvia to flood the NHL's poll and power the 21-year-old forward into the game as a starter.

The debut of The Guardian Project. Yes, the ill-conceived (RIP, Stan Lee) NHL comic book crossover made its infamous debut at the Raleigh All-Star Game in 2011. And the world was never the same. I mean, until the Guardian Project disappeared from the NHL's marketing plans about a year later. Then it was pretty much the same.

It was only 7 yrs ago when one of the NHL's biggest embarrassments in their history - The Guardian Project flopped miserably at the NHL All-Star Game. Seems like the League is trying to outdo itself here with #KidRock. Check this out for a laugh - https://t.co/6s7mFgHA7X

Mike Liut proves there can be goaltending in an All-Star Game. The Blues netminder stopped 25 shots in 31 minutes, which included 18 shots in the first period by a Wales Conference team that featured the host Los Angeles Kings' entire Triple Crown line. He won the MVP award, one of only five goalies to ever win it. It earned him a new Toyota Celica Supra!

Wayne Gretzky scores four goals in a period in 1983. The game, held at the Nassau Coliseum, saw the Campbell Conference lead the Wales by one goal headed into the third period. The Campbell team won 9-3, thanks to Gretzky's All-Star-Game-record four goals in the third, three of which were assisted by Mark Messier. The flurry helped Gretzkywin his first of three All-Star MVPs.

Teemu Selanne wins 1998 All-Star MVP. The Mighty Ducks of Anaheim star was playing for Team World in that game's format. He won the Puck Control Relay in the Skills Competition and then tallied a hat trick in the All-Star Game to become the first European-born MVP and the first MVP from a losing team since Grant Fuhr in 1986.

The nice answer is Keith Tkachuk and Jeremy Roenicktying shot-accuracy legend Ray Bourque in the 1999 skills competition in Tampa. The real answer, of course, is that the Coyotes were to host the 2006 All-Star Game, but it was scuttled due to the Olympic break, and then the Coyotes were passed over in subsequent attempts to reacquire the game. Sigh.

Pavel Bure wins MVP. The 2000 NHL All-Star Game in Toronto was a pretty memorable one for the Panthers, what with Viktor Kozlov tying Ray Bourque in shot accuracy and Bure scoring a hat trick to lead the World All-Stars to their first win over the North Americans. The Bure brothers combined for six points, becoming the first brothers to score points in the same game since Maurice and Henri Richard in 1956.

Patrick Kane wins the Breakaway Challenge as Superman. Marian Hossa strapped on the cape. Kane put on the Clark Kent glasses. (Not canon, but whatever). On his breakaway attempt, he dove to the ice on his stomach and passed the puck with his glove to his stick for an inventive goal that was good enough to win the title.

Wayne Simmonds scores the game winner, takes MVP. In 2017, Simmonds returned to his first NHL home, Los Angeles, to compete in his first All-Star Game. He scored the definitive goal in the 3-on-3 tournament final for the Metro Division -- with 4 minutes, 48 seconds left -- to become the first Flyer to win MVP since Reggie Leach in 1980. He also scored two goals in the semifinal. He won a Honda Ridgeline. "No clue what I'm going to do with [the truck]. Maybe somebody -- my mom, dad, brothers or somebody -- needs a car or something like that. I don't need it. It's a nice luxury to have, but who knows what I'll do with it," he told Philly.com.

Brian Boyle makes the All-Star Game. Boyle's heartwarming comeback in 2017-18 from chronic myeloid leukemia that led him all the way to the All-Star Game in Tampa (as Taylor Hall's injury replacement) became perhaps the story of the event. "I'm very thankful. I always have been. I've never taken it for granted to play in this league. To be here and to see all these stars, the guys, how humble they are and then how supportive they've been for me throughout the year and even today, it's been wild. It really is," he said.

Wayne Gretzky wins MVP ... in Edmonton. Gretzky, traded to the Kings in 1988, returned to Edmonton for the All-Star Game in only his second appearance there with the opposition. He skated on a line with Jari Kurri. He was warmly greeted by the fans. He won the MVP award with a goal and two assists in the Campbell Conference's 9-5 win, getting a car as a reward, which he gifted to former Oilers teammate (and bodyguard) Dave Semenko, who had just retired.

Gordie Howe gets into a fight at the All-Star Game. Way back in 1948, in the second NHL All-Star event, Howe was a member of the team of stars who took on the defending Stanley Cup champion Maple Leafs, which was the initial format for the game. At Chicago Stadium in 1948, Gordie Howe and Gus Mortson of the Leafs got into an actual fight in the All-Star Game that was so nasty that the two were held under police guard until their penalties were over. Old-time hockey!