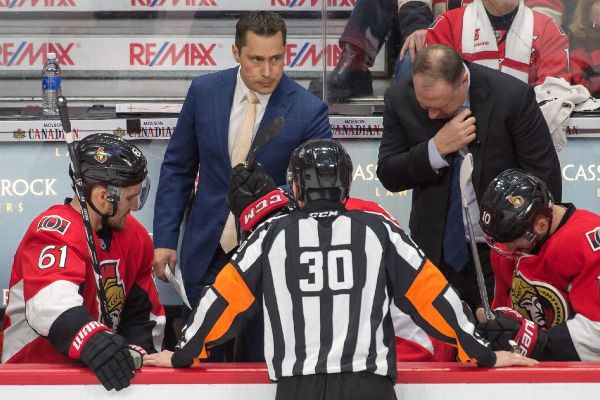 ESPN
NHL coaches have been given more technology on the bench in time for the Stanley Cup playoffs.

The league is making three iPad Pros available for coaches on every bench and officials will also have them to review coach's challenges, The Associated Press has learned. All 16 playoff arenas were outfitted with the iPads and also Macs for video coaches as part of a collaboration with Apple.

This season, coaches have been able to use video monitors on the bench to help them decide when to challenge offside and goaltender interference situations. The iPads, which were tested late in the regular season, provide real-time video capabilities to show players how they're performing.

"By the time the player gets off his shift, that content is available within a minute, I guess, from the time it actually took place," NHL executive vice president and chief technology officer Peter DelGiacco said. "Today generally speaking a lot of that would be done between periods and there's a limited amount of time. ... This kind of gives the coaches and the players real-time access so that they can make adjustments."

The monitors had already become a game-changer for coaches, giving them more information on challenges and for player feedback. The technology is even more valuable in the playoffs when goals are scarce and the offside and goaltender interference challenges can decide a game -- or a series. The St. Louis Blues lost Game 2 to the Chicago Blackhawks last year when a coach's challenge wiped out a go-ahead goal by Vladimir Tarasenko, and even though they won the series they felt the attrition of needing seven games to advance.

"It's going to be huge in the playoffs," Washington Capitals coach Barry Trotz said. "The referees, the league wants to get it right, the coaches want to get it right."

During the season, 86 of 313 coach's challenges were successful in overturning calls. With the aid of the monitors, headsets and video coaches watching live, each team developed its own step-by-step process in deciding when to challenge a goal for goalie interference or offside and tried to perfect it.

Speed will be key as the league cracks down on coaches who dawdle before deciding to challenge.

"When you have challenges, to have the ability to quickly look at what you're doing and now they're trying to expedite it even that much more," Arizona Coyotes coach Dave Tippett said. "When you're in those critical moments, you've got to make that decision in a hurry. You better have somebody good back there that knows what you want to see and the ability to make the decision quick."

Having iPads in the hands of assistant coaches will provide a crucial benefit for player adjustments. Late in the season, Ottawa Senators winger Bobby Ryan looked at film of Pittsburgh Penguins goaltender Matt Murray on the bench before a shootout, and coach Guy Boucher has also used the advanced technology beyond challenges.

"We look at it because sometimes we're not seeing everything that's going on on the ice," Boucher said. "It's good also for feedback with our players and, yeah, it's good for challenges and all that. I think it's been important since the beginning of the year. It helps is also between periods because instead of looking at 12 different things between periods, we might have to look at five or six, so it's quicker for us to get back to our players and tell them about adjustments because sometimes we already know a few adjustments and a lot of times we'll address it right on the bench."

David Lehanski, NHL senior VP of business development, global partnerships and sponsorship sales, said the move got done in time for the playoffs but the league would have also been OK starting next season.

"It's equal parts of us believing this truly will help the coaches and the officials and we're going to make decisions faster and more accurately and all those things and it gives us an opportunity to get a lot of feedback in from everyone who's going to be involved from a playoff standpoint and then make some refinements and enhancements leading into next season for a full league-wide deployment," Lehanski said.

The biggest impact of the technology all season has been on coaches because they can point out the exact time of a potential offside or explain to an official what they see as goaltender interference.

Trotz recalled a goaltender interference challenge earlier this season where he was able to point out how an opponent was pushing down on Braden Holtby's blocker and keeping him from being able to rotate and make the save.

"We explained it and we won it," he said.

Lehanski said the league has conversations with NFL and Major League Baseball officials about their tablets and video technology on a regular basis. The NFL has had Microsoft Surface Tablets on sidelines for the past three seasons, and now the NHL is upping its game with more changes to come in the future.

"What you see today is not what it's going to be two years from now," DelGiacco said.