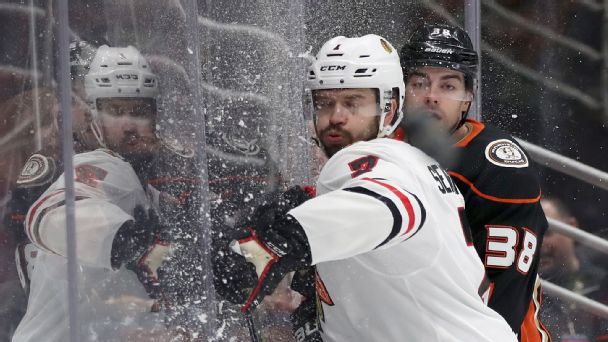 Emily Kaplan, national NHL reporter:There's always a caveat when it comes to the state of the Chicago Blackhawks. Yes, you must admit as a disclaimer that they won three Stanley Cups in six years with this core. But, as Chicago has come crashing down to pedestrian status this season, its lack of long-term viability has been exposed.

The biggest quagmire for Blackhawks GM Stan Bowman? The contract of Brent Seabrook. The defenseman carries a hefty cap hit of $6.875 million and is locked in for seven more seasons. At that point, Seabrook will be 39. Here's the problem with Seabrook's deal: In September 2015, when the extension was handed out, it didn't feel like a terrible deal. Sure, the term was long, but he was a leader (who had recently been named an alternate captain; teammates gushed about Seabrook and called him the team's "heartbeat"), durable (he had only missed 10 regular-season games in nine seasons) and he had developed chemistry with Duncan Keith as one of the league's most feared shutdown pairs. From 2007 until the time of the extension, they spent 7,336 of 10,404 possible even-strength minutes together. Identifying, developing and maintaining a top pairing is one of the most difficult moves for a GM. Of course Bowman wanted to keep this duo together until at least 2023.

It didn't unfold quite as planned. Seabrook isn't as much of a liability as most Blackhawks fans claim, but there's no question he's showing signs of regression. He no longer plays with Keith, some of his defensive lapses are jarring, and his ice time has been shaved down to around 20 minutes per game, which is close to his average as a rookie. When Seabrook was named a healthy scratch for a January game against Ottawa this season, it felt like an admission: Chicago may have a Seabrook problem. As the Blackhawks become faster and younger, trying to squeeze one more run out of this core, it's clear that Seabrook's contract is not aging well, and could bog down future plans.

The deal has forced Bowman to make some tough decisions, like parting with Niklas HjalmarssonandArtemi Panarin (the skilled winger was due for a decent contract extension that would hardly fit under Chicago's cap). It will force Bowman to get crafty yet again this offseason, cutting ties with popular players in order to circumvent a costly mistake. In signing Seabrook, the Blackhawks paid for past performance and not future projection. But hey, at least they won three Cups.

Greg Wyshynski,senior writer: The hallmark of any bloated, regrettable contract is how hard a team is going to work to make it disappear. So, with that established: Bobby Ryan has a quagmire of a deal with the Ottawa Senators.

Ryan signed his seven-year, $50.75 million contract extension in October 2014. It was a time when the franchise was defined by high-profile player departures and the stingy ownership of Eugene Melynk, who the Ottawa Sun wrote "has taken countless hits from fans worried about the club's ability to compete with a limited budget." Good to see not much has changed in three-and-a-half years.

Well, one thing has: Ryan's offensive output. During his time with the Anaheim Ducks through his 2013 trade to the Senators, Ryan was an elite scoring winger who averaged 0.74 points per game over the first 526 games of his career. Since 2015, when his contract extension started? Ryan has a .572 points-per-game average. In the first phase of Ryan's career, he had 188 goals; since his deal started, he has 43 in 187 games, including 21 in his past 106 games.

Ryan turns 31 on St. Patrick's Day. This isn't to say that he can't have a career renaissance, but the prospects of it happening in Ottawa are cloudy at best. Meanwhile, Ryan is signed through 2022 with a $7.25 million cap hit and a limited no-trade clause. He makes a $7.5 million base salary in each of those years. On a team with Melynk managing the checkbook. (Or chequebook, as it were.)

As we said: The more troublesome the contract, the more work a team is willing to do pass it along to another team. Which is why the Senators were rumored to have anchored Ryan's contract to an Erik Karlsson trade at the deadline, and still might do so this summer.

Imagine limiting the return on a trade involving your franchise player because you're that thirsty to get a contract off your books ...

Chris Peters, NHL prospects writers: The two contracts listed above by Emily and Greg are definitely tougher to deal with than this one, but the unrestricted free agent deal Milan Lucic signed before last season with theEdmonton Oilers is going to only get more burdensome once Connor McDavid's new contract kicks in next season. Lucic will be tied for the third-largest cap hit on the team next year, assuming the Oilers don't make other deals to help improve a forward group that lacks depth. There are also five more years remaining on Lucic's deal.

You could make the case that Lucic earned his keep on the team last year, with 23 goals and 50 points in 82 games for a playoff team. This year, however, he's really struggling to produce. Prior to scoring his first goal since Dec. 23 on Monday night, Lucic had just one assist in his past 18 games and only five points since the calendar flipped to 2018. His 0.48 points per game is Lucic's lowest rate of production since he was 21.

Now, part of that comes with some bad luck, as Lucic is dealing with a career-worst 7.9 shooting percentage. But the big concern at this point is if this season is not an anomaly. If this becomes closer to the norm over the next five seasons, it's a big, big problem. Lucic will turn 30 this summer, so it's not like he's done as a player. We're just not going to expect him to produce at a terribly high rate relative to earlier in his career. In truth, Lucic's numbers haven't necessarily been consistent year to year anyway.

What makes this deal a little tougher is the relative lack of flexibility it gives the Oilers should they need it. There's the cap space it takes up, of course, but the deal also comes with a full no-movement clause for the next three seasons before moving to a limited no-trade by June 1, 2021 (hat tip to CapFriendly.com). The Oilers are in desperate need of scoring help on the wings, but it only gets harder to make improvements when you have a player you'd have a hard time moving taking up a good chunk of cap space. Considering there is about to be $21 million tied up annually in the Connor McDavid and Leon Draisaitl deals, and how much work the Oilers roster needs, the Lucic situation is probably going to get more and more attention with each passing year.
Report a correction or typo
Related topics:
sportsespnworst contractchicago blackhawkssalary capedmonton oilerstrade deadlinenhltrademilan lucicottawa senatorsbrent seabrookcontractsbobby ryan
Copyright © 2021 ESPN Internet Ventures. All rights reserved.
TOP STORIES
Jelani Day's cause of death released
Va. extreme couponers sent to prison in $31.8 million fraud scheme
Assistant director who handed Baldwin gun had been fired previously
Communities of color most impacted by Chicago area air pollution
Club owner says he called CPD twice before deadly Wicker Park drive-by
Another John Wayne Gacy victim identified
Bear cubs playfully wrestle in snow in Lake Tahoe
Show More
Chicago Weather: Sunny, drying out Tuesday
Hertz is buying 100K Teslas
Chicago FOP president leads City Hall rally to oppose vaccine mandate
After Brian Laundrie found, family says they will not hold funeral
Judge sets final ground rule for Kyle Rittenhouse trial
More TOP STORIES News