NLCS questions: Will the Dodgers-Cubs rematch be better than the original? 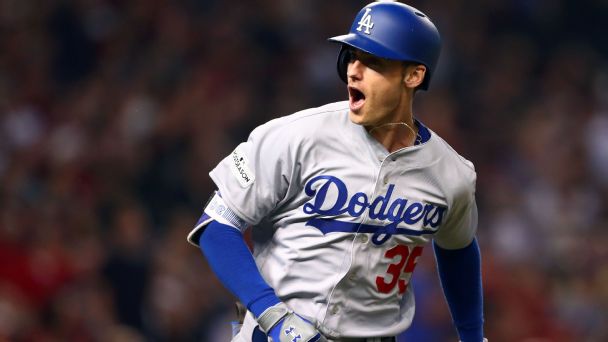 ESPN
By Tim Kurkjian
The rematch is often better than the original, some contend, so we can only hope that's the case as the Los Angeles Dodgers play the Chicago Cubs in the National League Championship Series for the second straight year.

It starts in L.A., where the Dodgers went 57-24 this year. They have great momentum, but so do the Cubs after winning an NL Division Series against the Nationals in one of the greatest and stupidest games in major league history.

What did each team learn from its NLDS experience this year?

The Dodgers have righted the ship. They pummeled the Diamondbacks and swept the series, stringing together one great at-bat after another. The Dodgers look much more like the team that got to 55 games over .500 than the team that lost 11 in a row and 16 out of 17. And now they have their pitching all lined up, rested and ready: Clayton Kershaw, Rich Hill, Yu Darvish and Alex Wood.

Meanwhile, the Cubs showed how tough of a team they are by beating the Nationals 9-8 in Game 5, the second-highest-scoring winner-take-all game in postseason history (to the Pirates' 10-9 win over the Yankees in Game 7 in the 1960 World Series). The Cubs came back from a 4-1 deficit after two innings, chipped away and found a way to win, thanks in part to, among other crazy things, a run-scoring strikeout/passed ball, a catcher's interference, a ball lost in the lights and a pickoff in the eighth inning with the tying and lead run on base.

As the Cubs flew to L.A. after the game in Washington, they had to be asking themselves, "How did we win this game?'' But they did. That's what great teams do. They find a way to win.

What is the status of the Cubs' rotation?

They used their top four starting pitchers in Games 4 and 5 of the NLDS, leaving Game 1 of the NLCS up in the air.

Jon Lester, who has made 20 starts in his terrific postseason career, threw 55 pitches in relief in Game 4 on Wednesday night. Jake Arrieta, who started that game and wasn't particularly sharp, is a possibility, but he would be going on short rest as he continues to try to come back from a hamstring injury. Kyle Hendricks started Game 5 on Thursday night, and Jose Quintana pitched in relief. And then there's No. 5 starter John Lackey, who didn't pitch in the NLDS, so he is completely rested.

This is a small problem to have, given what it took to get the Cubs to the second round.

In what shape is the Dodgers' bullpen?

It is really good right now: In the NLDS against the Diamondbacks, the Dodgers pen worked 11 innings, had one walk and 10 strikeouts, and held opposing hitters to a .195 batting average. Kenta Maeda was an important part of that pen and is always so good against right-handed hitters. He retired all six batters he faced, striking out four. He gives the Dodgers another option to bring the ball to Kenley Jansen, who was probably the best closer in the game in 2017.

Jansen had seven walks and 109 strikeouts this year, a 15.6-1 strikeout-to-walk ratio. In major league history, Kershaw in 2016 is the only other pitcher to have a strikeout-to-walk ratio that high during a season of at least 100 strikeouts. Jansen proved in the 2016 postseason that not only can he pitch more than one inning, but he seems to enjoy it and thrive on the extra work.

What do we make of the Cubs' bullpen?

It was not reliable in the NLDS. Carl Edwards Jr., who had a solid regular season, struggled with his control and command in the division series, so much so that he was taken out with a 1-0 count and the bases loaded in Game 4. Then he faced one batter in Game 5, walked him, and was removed from the game, much to his displeasure.

Closer Wade Davis, who gave up a grand slam to Michael Taylor in Game 4 (the second one he has allowed in his career), saved the day in Game 5. Davis has never had a regular-season save of more than one inning. Prior to Thursday night, he had two two-inning saves in his postseason career, but in Game 5, he got the final seven outs, including a 1-2-3 ninth that finished with a strikeout of Bryce Harper.

Davis is one of the best closers in the game, but those around him have to be better if they are going to beat the Dodgers.

Is Cody Bellinger ready for the responsibility of producing in the postseason?

Absolutely. In Game 3 of the NLDS, Bellinger, 22, became the youngest Dodger to hit a postseason home run. And he made a couple of excellent defensive plays to boot.

Sometimes, someone that young, playing in his first postseason, can be blinded by the bright lights. But given Bellinger's background -- he's the son of a former major leaguer -- and the way he flawlessly handled everything thrown at him this season, there's no reason to think he won't be a big run producer in the NLCS.

Plus, he has a lot of help in that lineup, which scored 20 runs in three games against the Diamondbacks. Third baseman Justin Turner thrives in the postseason (1.105 OPS in 83 plate appearances), Corey Seager appears to be healthy again, and Yasiel Puig seems focused and motivated.