No. 7 Duke can't afford to look past Notre Dame 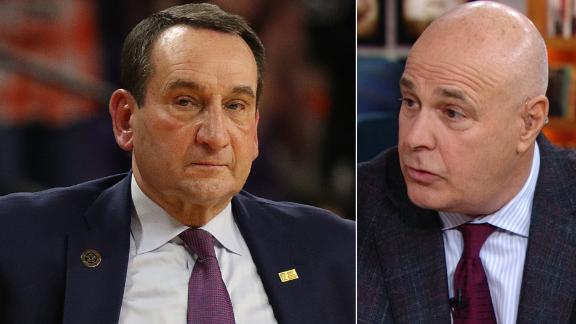 ESPN
It might seem like a chance for No. 7 Duke to catch its collective breath after a taxing stretch on the schedule. Just don't expect the Blue Devils to take that approach.

For Notre Dame, there's no break in the Irish's grind to improve their position with the postseason about a month away.

Duke has won six straight games, including a brutal combination of a trip to rival North Carolina and a matchup with No. 8 Florida State in a three-day period.

What coach Mike Krzyzewski witnessed was a level of toughness that he said made him appreciate his team even more.

"They're really developing into a good team," he said. "I really love these guys, because it's different guys. We don't have a starting lineup, we have a team. Sometimes when you have a starting lineup you put a ceiling on the other guys in ego, in opportunity, in all that, and it hasn't happened here with this group."

Duke (21-3, 11-2 Atlantic Coast Conference) is a half-game out of first place behind Louisville.

"I'm disappointed for us because I think we are playing pretty well, we played fearlessly and we put ourselves in position," Notre Dame coach Mike Brey said.

Yet there have been encouraging stretches despite the latest outcome.

"You feel like you're getting better and it's the right time of the year," Brey said.

Brey said the Irish have their eyes on trying to secure one of the four byes into the ACC Tournament quarterfinals, realizing the loss to Virginia was a big setback in that pursuit.

This will be Notre Dame's third consecutive road game for the only scheduled matchup with Duke this season.

"It would be huge for our resume, it's so needed," Brey said. "We're within striking distance. But we need more. Playing in the ACC, there's opportunities that keep coming at you ... and there's another one Saturday."

For Duke, the Florida State game followed three consecutive road outings. That proved to be a valuable learning period for the Blue Devils.

"I think we can use that to propel ourselves forward, but we can't just say that," guard Tre Jones said. "We've got to track it down, learn what we can do better in these past two games, and continue to work to be a better team."

Duke and Notre Dame have been two of the ACC's three highest-scoring teams, with Duke atop the list at 81.9 points per game.

Duke has put four or more players in double-figure scoring in 14 games this season. In the Florida State game, junior guard Jordan Goldwire matched his career high with 13 points.

"Just being ready to shoot, my teammates and the coaching staff have the confidence in me, so it felt good to see the ball go in," Goldwire said.

Duke center Vernon Carey Jr. has 12 double-doubles, matching the most for a freshman in the country.

Notre Dame senior forward John Mooney has 20 double-doubles in his 23 games this season.

This will be the middle game in a seven-day stretch for Notre Dame, which plays host to North Carolina on Monday night.