No. 8 Notre Dame, No. 9 Auburn and No. 13 Wisconsin, while facing entirely different opponents this week, have a similar challenge: Hit the road and forget the past.

Notre Dame will take its buses to No. 19 Michigan (7:30 p.m. ET Saturday on ABC), where it has lost in each of the past four trips. Auburn travels to No. 2 LSU, where it has lost the past nine games over a span of 20 years. And Wisconsin? Well, its pain is recent history -- last week's loss at Illinois, which was the biggest upset in the sport so far in 2019 -- only for the Badgers to wake up and start preparing for the most difficult game of the season, Saturday at No. 3 Ohio State.

"We have to turn the page fast," Wisconsin coach Paul Chryst said.

Welcome to second-chance Saturday, where three one-loss bubble teams have an opportunity to regain some footing in the College Football Playoff conversation -- or drop out entirely. No one-loss team with a chance to win its Power 5 conference title is out of the mix. Where it becomes a distinct disadvantage is if those teams are compared to undefeated conference champions, but if Wisconsin, Auburn and Notre Dame keep winning -- while others stumble -- the debate will begin.

"It doesn't matter what anybody else thinks, good or bad or in between," Auburn coach Gus Malzahn said. "We are taking it one game at a time. We are staying focused with our head down. We are not going to get distracted by anyone else's opinion, good or bad."

Auburn is finishing a stretch during which it will have been on the road for four of five games. After the Oct. 5 loss at Florida, Malzahn's team has little if any margin for error -- particularly with Georgia and Alabama still looming in the regular season -- but we've also seen that schedule work in the Tigers' favor before.

Notre Dame, meanwhile, is making its first road trip since losing at Georgia on Sept. 21. The Fighting Irish are in must-win mode and facing a Michigan team looking to rebound from last week's loss at Penn State. Michigan hasn't lost to Notre Dame in Ann Arbor since 2005.

"This is a pretty mature group," Notre Dame coach Brian Kelly said. "You don't worry about things like going on the road after being off for five weeks."

Wisconsin probably wasn't too worried about heading to Illinois, either.

Only two Saturdays remain before we gain real insight into what the 13-member CFP selection committee is thinking this season. Here's a look at how these three games will help shape the group's first ranking on Nov. 5:

LSU enters the game with a 46% chance to reach the playoff, according to the Allstate Playoff Predictor, fifth-best of any school. LSU has looked like the better team and has a proven home-field advantage, but Auburn still controls its playoff hopes with three games remaining against top-10 teams. In 2017, the Tigers lost to both Clemson and LSU but beat the selection committee's top two teams (Alabama and Georgia) in the regular season.

Auburn had a chance to become the first two-loss team in the CFP, but it lost to Georgia in the SEC championship game that season. This season, the Tigers' schedule presents similar chances to impress the committee.

"We have an opportunity and two years ago we let one off the hook and a lot of our guys who experienced that are here," Malzahn said. "If we get that opportunity, we got to finish it."

If LSU loses, its chances of making the playoff drop to 17%, according to the Allstate Playoff Predictor, and it makes the Nov. 9 trip to Alabama even bigger (if that's possible). That's the only game ESPN's FPI doesn't give LSU more than a 50% chance to win.

Even with Wisconsin's stunning loss last week, this game is still impactful because of the potential for Ohio State to lose, however unlikely it might be. (ESPN's Football Power Index gives the Badgers only a 16.1% chance to win.) Should Wisconsin pull off the upset, the Big Ten gets complicated. First, it would reiterate that Wisconsin isn't done yet.

Should the Badgers somehow run the table and win the Big Ten (again, unlikely but possible), they would probably finish in the top four. (Remember, they beat Michigan, too, and in more convincing fashion than Penn State.) Second, a Wisconsin victory would do more than just shift the immediate spotlight to the undefeated Nittany Lions. Ohio State and Penn State meet in Columbus on Nov. 23, and if the Buckeyes win, and they both finish with one loss, Ohio State would win the East because of the head-to-head result.

If Wisconsin wins Saturday, it's still possible the Badgers and Buckeyes could see each other again in the Big Ten title game.

"That's college football," he said. "We've been on the other side of that. We know all about that. ... You have to bring it every week. It's the same thing with us. We have to bring it this week. It's going to be our best game of the year, our biggest challenge on both sides of the ball. We have to prepare better than we have all year."

Considering the selection committee compares common opponents, this is big for the Irish because Penn State, Ohio State and Wisconsin all will also have played Michigan by the end of the season. If Notre Dame gets into a résumé debate with any of those Big Ten contenders, the committee will consider the Michigan results.

The Irish have to win, but every Michigan loss also hurts Notre Dame's strength of schedule. If the Wolverines fall out of the top 25, Notre Dame won't have any wins over top-25 opponents unless the selection committee adds them later. With the exception of Stanford, all of Notre Dame's remaining opponents are above .500. As long as they stay that way, those would be deemed respectable victories by the committee, but there's nothing that currently compares to the schedule strength of the SEC contenders or even possibly one-loss Oregon.

Notre Dame has a 12% chance to reach the playoff, according to the Allstate Playoff Predictor, but that drops to 0.2% with a loss. 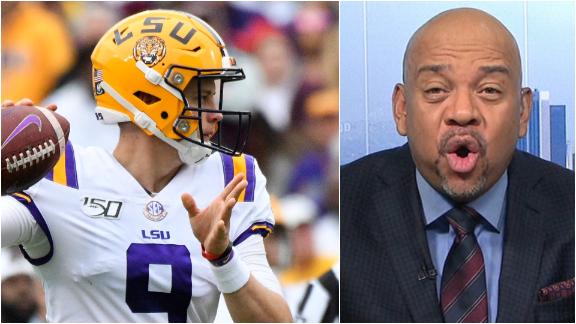