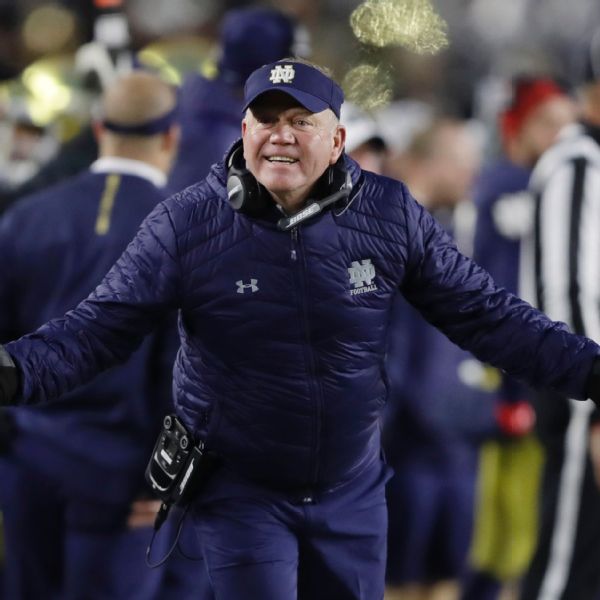 ESPN
By Adam Rittenberg
Notre Dame coach Brian Kelly says the school will examine its future scheduling approach with the College Football Playoff in mind after falling out of this season's race with two November losses.

The Irish rose to No. 3 nationally before falling 41-8 at Miami on Nov. 11, their second loss of the season. Notre Dame finished the regular season at 9-3 after losing at Stanford in its finale. It faced four teams in the top 16 of the final CFP rankings and five teams in the final Top 25. Four of Notre Dame's final six games took place against ranked opponents.

The 14th-ranked Irish face No. 17 LSU on Monday in the Citrus Bowl presented by Overton's.

"We didn't have that breather game the week before one of our rivals," Kelly told ESPN. "There's some other conferences that have it built in, and they do it for a reason, and it works out well for them. That's really an institutional decision, and we're going to have to sit down, we're going to have to look at it hard. We thought the 13th [data] point was really important, right? But that doesn't seem to be that important anymore.

"It seems like the goal posts shift and move a little bit as it comes to how you get in, and this schedule is really, really difficult."

Notre Dame's scheduling agreement with the ACC calls for five games per season against league members. The Irish have annual rivalries with USC, Stanford and Navy, and frequent series with opponents like Michigan State, which it visited this season. In 2015, Notre Dame's only losses came on the road against Clemson and Stanford, and the Irish finished eighth in the final CFP rankings.

Asked if a different approach to scheduling could upset Notre Dame fans, Kelly replied, "I know this: They're mad because we didn't make the playoffs. So if you win 'em all, they can't be mad at you. We've got to play our five ACC schools, so you can't have everything."

Notre Dame's 2018 schedule opens with Michigan at home, and features road games against USC, Virginia Tech and Northwestern, and home contests with Stanford and Florida State. Future opponents outside ACC opponents, USC, Stanford and Navy include Michigan again in 2019, Georgia in 2019, and Wisconsin and Arkansas in 2020.