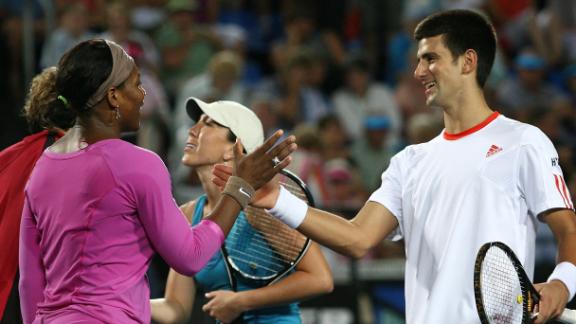 NEW YORK -- There will be much anticipation heading into the latestVenus-Serenashowdown Tuesdaynight. But for Novak Djokovic, the clash just doesn't seem, well, logical.

When asked what he thought of the sibling rivalry, the world No. 1 player said he, for one, could not do it.

"The first thing that comes to my mind is how would I feel to play my brother, and I don't think that would be possible, honestly," Djokovic told reporters after his four-set fourth-round win against Roberto Bautista Agut on Sunday night. "I, in a way, admire what they're doing, for so many years to play against each other on such a big stage.

"It's strange, you know. They are sisters. They live together. They grew up together playing tennis. Of course they love each other, but then very have to be professional and go out on the court and play each other so many times in the finals of Grand Slams, in the biggest matches.

"Chapeau for that. But I don't know if I'll be able to play my brother. It's not possible. I would not be able to handle [that] on the court."

Serena Williamswill face sister Venus for the 27th time in their careers. Serena holds a 15-11 record and has won seven of the past eight matches, the most recent being a straight-sets victory in the fourth round at Wimbledon. This is the first time, however, that there is a calendar-Slam attempt on the line, as Serena is three wins away from the feat last achieved by Steffi Graf in 1988.

While Djokovic said he couldn't handle the sibling rivalry himself, he said he had nothing but respect for what the Williams sisters have accomplished.

"It's admiration. But for me, somebody who has siblings, it's hard to watch, honestly, as well," Djokovic said. "It's just going after each other and after that going back to the same home like nothing happened. ... I respect them, the fact that they're able to kind of switch off and be on the court regardless who is across the net.

"They're great for the sport, no question about it, don't get me wrong. But I can't talk about their rivalry."