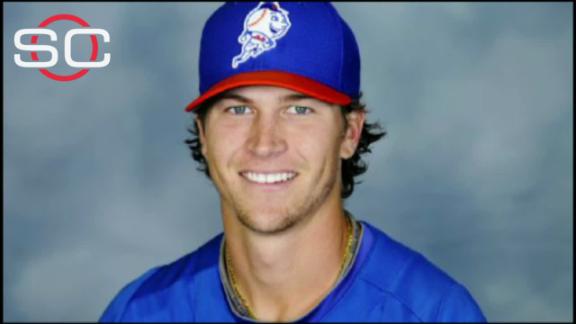 KANSAS CITY, Mo. -- The New York Mets often use the hashtag "HAIRWEGO" on Twitter to promote right-hander Jacob deGrom's starts. That may take on a new meaning after the World Series.

DeGrom indicated that he is likely to cut his signature flowing locks after the Fall Classic.

Asked on Tuesday afternoon who had better hair between him and fellow Game 2 starter Johnny Cueto of the Kansas City Royals, deGrom revealed: "I think mine is gone at the end of the year, so I'll give that award to him. It's driving me nuts. I've got to get rid of it."

DeGrom had closely cropped hair at Stetson University and during his early years in the minors.

For his part, Cueto voted for himself as well.

"I'm going to say mine,'' Cueto said of his hair through interpreter Pedro Grifol. "I'm not going to say someone else's.''

DeGrom is 3-0 with a 1.80 ERA this postseason, but he has struggled with fastball command and high early pitch counts in his past two outings. That's one major reason that manager Terry Collins decided to give deGrom an extra day of rest and start Matt Harvey on Tuesday night at Kauffman Stadium in Game 1 of the World Series.

"I just felt I was having trouble locating, which happened to me early on this year," deGrom said. "I don't know if it was fatigue. I feel good now, so I don't think the rest hurt me."

DeGrom did respond late in the regular season when the Mets had him skip a start because they believed he was suffering from fatigue.

"Now he's at a stage where the ball doesn't have the life down. Even though he has the velocity, it doesn't have the life it once had," Collins said. "He's been missing balls up in the zone. For me, that is that release point -- that consistent release point you have to make the pitches. If you start to get a little fatigued, that hand just doesn't catch up sometimes. That's why we wanted to give him an extra day, because the last time we pushed him back a little bit, he came out throwing great. We're hoping that extra rest is going to make a difference tomorrow night. This guy is as good as there is in the league."

deGrom says long locks gone after season
In honor of Jacob deGrom's soon to be departed hair, we look back at some of the most memorable hair in sports history.
Related topics:
sportsespnjacob degrom2015 world serieshairwegostories about the city of new yorkmanelockshaircutjohnny cuetohairnew york metsmlb
Copyright © 2020 ESPN Internet Ventures. All rights reserved.
More Videos
From CNN Newsource affiliates
TOP STORIES