Oregon favored by TD over OSU 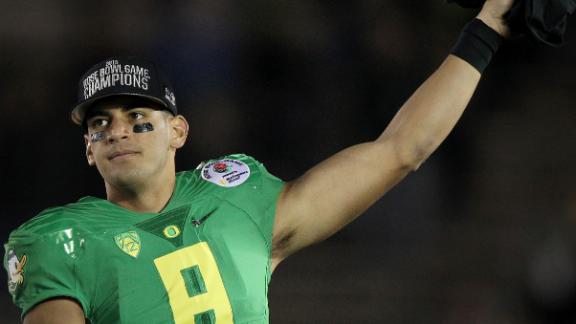 The Wynn and Westgate SuperBook opened the Ducks as seven-point favorites over the Buckeyes for the Jan. 12 game in Arlington, Texas. Station Casinos' sportsbook already was up to Oregon minus-7.5 late Thursday night.

The Wynn had Oregon listed at minus-290 on the money line with Ohio State plus-245 to win straight up.

The over/under total opened at 70.5 at the SuperBook but was quickly bet up to as high as 73.5.

The Ducks advanced to the championship game with an impressive 59-20 rout ofFlorida Statein the Rose Bowl Game presented by Northwestern Mutual on Thursday. Oregon, led by Heisman Trophy-winning quarterback Marcus Mariota, has covered the spread in nine straight games.

"We've got one more to take care of," Mariota said.

"It's perfect," said Ducks linebacker Derrick Malone Jr. "I need another game. I'm glad I can still be a part of this. If we didn't have another game, I wouldn't know what to do with myself."

It will be the third straight game in which the Buckeyes are projected as underdogs. Ohio State was an underdog to Wisconsin in the Big Ten championship game and to No. 1Alabamain the Allstate Sugar Bowl. The Buckeyes blew out theBadgers and then upset the Crimson Tide 42-35 on Thursday behind third-string quarterback Cardale Jones.

"I feel like I'm going to Disney World," said a giddy Tyvis Powell, whose interception of Blake Sims ended the Tide's final shot.

"Oregon won by 40?" Ohio State coach Urban Meyer said Thursday night, startled when he heard the result during his postgame news conference in New Orleans. "I gotta go. We gotta go get ready for that one."

"We know Oregon," Meyer added. "I'll probably be able to call Oregon's plays because we study them and they study us. There's a mutual respect."

Both Oregon and Ohio State were among the preseason favorites to win college football's first playoff, but they suffered tough losses early in the season. The Ducks lost at home as 21-point favorites to Arizona on Oct. 2 but won their next nine games to reach the championship game for the second time in the past four seasons. Oregon lost 22-19 to Auburn in the 2011 BCS National Championship Game.

The Buckeyes lost at home to Virginia Tech as 10-point underdogs on Sept. 6. It was one of many obstacles that Meyer's team overcame to reach the championship game. In August, senior starting quarterback Braxton Miller was lost for the season with a shoulder injury. The SuperBook dropped Ohio State's odds to win the national championship to 50-1 after Miller was ruled out.

Money continued to flow in on the Buckeyes, though. In fact, at the end of the regular season, more bets had been placed on Ohio State to win the national championship than on any other team at the SuperBook, according to head oddsmaker Ed Salmons.