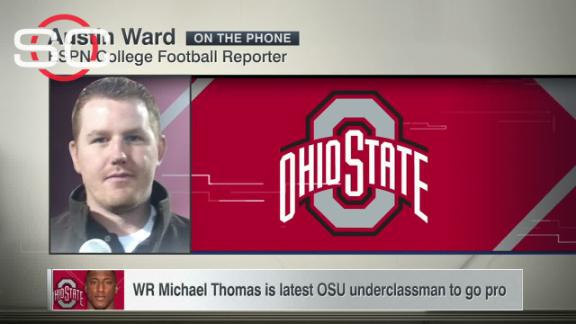 COLUMBUS, Ohio -- The list of Ohio Stateplayers leaving eligibility on the table to head to the NFL continues to grow, with safetyVonn Bellandwide receiver Michael Thomasthe latest to add their names, which runs OSU's total to nine players.

Thomas, a redshirt junior, led the Buckeyes in receptions and touchdown catches last season. He confirmed to ESPN.com's Joe Schad that he would bypass his senior campaign to capitalize on projections that have him being selected in the first round.

"We have accomplished so much here, and now I want to accomplish more at the next level," Thomas told ESPN. "I plan to bring hunger to succeed, route running, hands and ability to attack the ball to the next level. I am 100 percent happy with my college choice, and now me and many of my teammates are leaving, and I hope to see them all in the NFL."

Thomas, the nephew of former NFL andUSCreceiver Keyshawn Johnson,is the No. 2 wide receiver on Mel Kiper's Big Board.

Bell, an All-American, joined the exodus from Columbus on Tuesday. He had been weighing the option of staying in school but decided his time at Ohio State is over.

"I have decided to make myself eligible and enter the 2016 NFL Draft," Bell said in a statement. "It has been an honor and a privilege to play at the best university in the country, to play for the best coach in the country and to help bring the 2014 national championship to The Ohio State University and the best fans in the country. My time here has been very special to me and my family. And I thank all Buckeye fans for their love and support."

For Thomas and Bell, there will be plenty of familiar faces at the combine, and the pro day on Ohio State's campus will be loaded with elite prospects.

The Buckeyes had three players make their intentions to enter the draft public before last week's BattleFrog Fiesta Bowl, with defensive end and potential No. 1 overall pick Joey Bosa, running back Ezekiel Elliott and backup quarterback Cardale Jones kicking off the exodus of talent.

Since then, linebacker Darron Lee, safety Tyvis Powell, cornerback Eli Apple, wide receiver Jalin Marshall,Thomas and Bell have followed in announcing their decisions to head to the NFL.

"It is a very good junior class," Ohio State coach Urban Meyer said last week. "I take my hat off to them. This is the way it is. I'd rather be in this situation than have a bunch of not very good players."