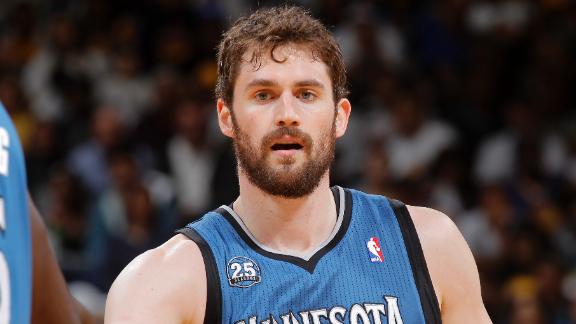 Kevin Love may want out of Minnesota, but Timberwolves owner Glen Taylor expects the All-Star forward to be with the team next season.

Taylor told the Pioneer Press on Monday that he doesn't plan to trade Love despite the player's intention not to re-sign with the Timberwolves when his contract expires after the 2014-15 campaign.

"I should never say never because who knows what might come up? But that's not our plan," Taylor told the newspaper.

"I'm not in a position where you would say absolutely I wouldn't do it, because what if something that I can't even speculate [on] happens? You'd say, 'You're nuts, Glen.' Maybe some team puts a value on him that's different than we suspect."

Taylor's comments came a day after sources told ESPN.com that Love has made it clear to the Timberwolves that he intends to become an unrestricted free agent after next season and has no interest in a contract extension to stay in Minnesota.

Love hasn't demanded a trade, sources said, and the Timberwolves, at the urging of Taylor, have rebuffed all interest in the three-time All-Star for months.

But teams around the league are increasingly expected to test that resolve once the lottery order is established Tuesday night, and The Associated Press reported that amid growing concern, the Timberwolves' stance has softened somewhat.

Two sources told the AP that the likely asking price for Love would include a high first-round pick in this year's draft and a veteran or two who could bring immediate leadership to a team that lacks it.

Sources told ESPN.com that the Golden State Warriors and Chicago Bulls are among the potential trade destinations that intrigue Love.

Taylor said there have been no trade talks to this point.

"At this point, we're not talking to any teams," Taylor told the Pioneer Press. "I haven't heard from Kevin or his agents or anything like that. We're assuming that Kevin will be here next season, and we're working with that scenario. This isn't the time for us to do anything but to prepare for next year."

He also voiced displeasure with the situation as whole.

"Kevin came here, played here, became an All-Star here ... I mean, what a wonderful environment," Taylor said. "The fans have been great and support him. I'm not sure that could have happened at other places. To be in a position where we have to defend that he might leave or not leave when he's under contract, it's difficult."