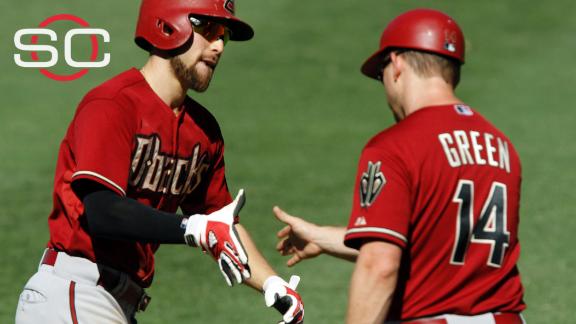 SAN DIEGO -- When his Arizona Diamondbacks played a series in San Diego in mid-April, Andy Green saw how excited the fans were about the new-look Padres.

"It was hopping. We lost two of three. The energy was palpable," Green said.

"It didn't turn out that way."

Hired Thursday as the Padres' new manager, it's Green's job to figure out how to get a talented roster to compete instead of collapse.

Green, who had been third-base coach of the NL West rival Diamondbacks, takes over a team that underachieved despite general manager A.J. Preller's aggressive offseason roster makeover. The Padres finished 74-88 and fourth in the NL West, 18 games behind the division champion Los Angeles Dodgers.

San Diego has had five straight losing seasons and has missed the playoffs for nine straight years.

The high expectations going into the season quickly disappeared.

"Expectations were extraordinarily high here last year, right?" Green said. "The city was brimming with optimism it was going to get what it waited for a long time, a chance to be back in the playoffs and to compete for a World Series. That expectation didn't do anything to raise the performance level. I think we have to cultivate a culture of expectation that this day we get the most out of what we can do. We get better today. We commit to a process rather than, Hey, we're going to end up in the World Series at the end of the season.'

"I'm all for goals, but printing out a T-shirt that says World Series or bust' doesn't necessarily get a team to the World Series."

Green completed his first season on Arizona's big league staff in 2015, and his 12th season in the Diamondbacks' organization. He was 219-189 in four seasons as a manager in Arizona's farm system.

He was named the Southern League Manager of the Year in 2013 and 2014. He guided Missoula to a Pioneer League championship in 2012.

The hiring of Green gives Preller the chance to continue to remake the team. Preller, hired in August 2014, fired manager Bud Black on June 15, when the team was 32-33. He replaced Black with Triple-A manager Pat Murphy, who had no big league experience.

The Padres were 42-54 under Murphy and he was fired the day after the season ended.

The Padres were a disappointment. Despite the addition of stars such as Matt Kemp, Justin Upton and James Shields and a bump in payroll past the $100 million mark for the first time, the Padres had their worst finish in four years.

After firing Murphy, Preller said he was looking for "a better fit going forward."

Preller said Green was impressive from the first interview.

"It was impressive in terms of his knowledge, his attention to detail, how prepared he was," Preller said. "I think you got a sense from him being on the field across from us, he was part of giving his team an advantage when we played against them.