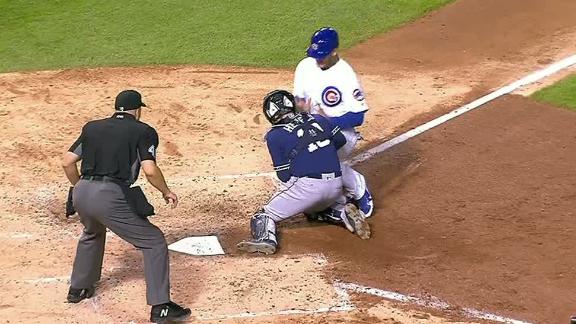 San Diego Padres manager Andy Greendid little to conceal his feelings about the home-plate collision that knockedAustin Hedgesout of Monday night's 3-2 loss to the Chicago Cubs, calling Anthony Rizzo's hit on the Padres catcher "a cheap shot" in his postgame news conference.

"I think you look at that play and it's a fairly egregious violation of the rule,'' Green said. "The rule exists to protect the catcher. The safety of the catcher is more in jeopardy now when you have the rule to protect you because you're not expecting to get hit when you give a guy a plate like that.

"That's a cheap shot. I'm not saying he's a dirty player at all -- nobody is saying that -- but he clearly deviated from his path to hit our catcher, took our catcher out. Rule exists to protect him. It's a disheartening play to see come about like that.''

Under rule 7.13, introduced in 2014, a runner may not run out of direct line to the plate to initiate contact with the fielder, meaning the runner can't go out of his way to plow through the catcher.

Rizzo was attempting to score from third base on a lineout to center field by Kris Bryant in the bottom of the sixth when he slammed into Hedges. Rizzo's left shoulder caught Hedges square in the right thigh and midsection and the San Diego catcher fell over backward, holding onto the ball for an inning-ending double play.

Hedges remained on his knees for several moments before slowly getting to his feet and leaving the game with a bruised thigh. He was replaced by Luis Torrens.

Hedges, who told the Union Tribune after that game that he was feeling "a lot better," said he didn't think the collision was malicious.

No one on the Cubs' side saw it that way.

"It's one of those plays where it's very sensitive,'' Rizzo said. "It's a play where I'm out by two steps. If I slide, he runs into me.

"I've talked to a lot of umpires about this rule. It's my understanding if they have the ball, it's game on.''

"You don't see it anymore because the runner thinks he has to avoid [the catcher] -- he doesn't,'' Maddon said. "If the guy's in the way, you're still able to hit him.

"I'd much prefer what Riz did tonight. What he did was right, absolutely right. There's nothing wrong with that and nobody can tell me differently.''