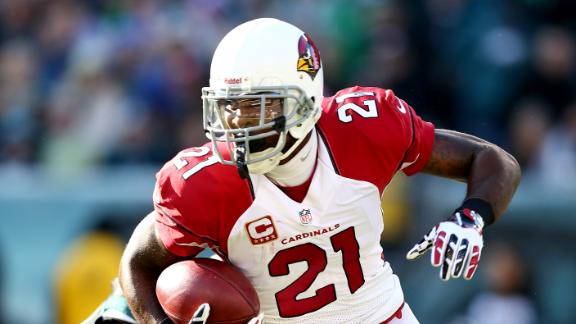 He just hopes to find out how much more "sooner rather than later."

Peterson and the Cardinals are in the early stages of negotiating an extension to the All-Pro's rookie contract. The three-time Pro Bowler said he and Sherman are in different stages of their contracts, which means Peterson's camp has more time to negotiate. Sherman had a year left on his rookie deal when Seattle re-signed him to a four-year, $57 million extension with $40 million guaranteed last week, while Peterson has two years remaining after Arizona exercised a team option for 2015.

Peterson wouldn't commit to saying his camp, which includes agent Joel Segal (hired in December), will use Sherman's deal as a baseline for his extension, but all signs point to that.

Peterson said he "kind of" had a smile on his face when he saw the terms of Sherman's deal.

Peterson congratulated Sherman on his contract and said the cornerback position has become a valuable one.

"I think cornerbacks are definitely worth the dollars that they get because now this league is a passing league," he said. "You need that shutdown corner to lock down one side of the field, or like myself, go out there the entire field."

Rather than play one side on defense, Peterson goes from side to side to defend the opponent's best receiver. His skill and worth to the team may well drive his contract higher than Sherman's.

The Cardinals just picked up the option on Peterson, and he's not sure any deal will get done before the coming season. He knows the Cardinals are eager to keep him, though.

But with two All-Pro nods to his credit and a Pro Bowl appearance in each of his three NFL seasons, does Peterson think he's worth more than Sherman?

"We'll see," Peterson said. "Got to ask the Cardinals. I mean, I think I am but at the end of the day both sides have to agree to terms and we'll see what those terms are and hopefully sooner than later."