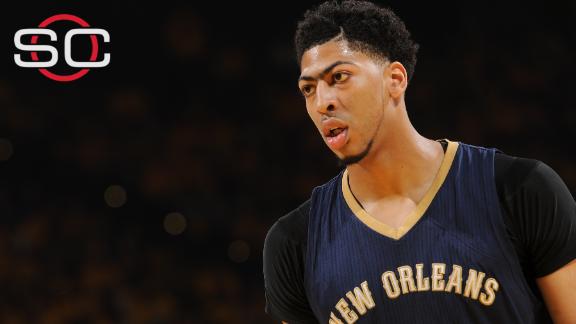 The New Orleans Pelicans and Anthony Davis, on the first day possible, have agreed to terms on a mammoth contract extension that should become the league's richest when it goes into effect, according to league sources.

Sources told ESPN.com that the Pelicans and Davis have agreed to a five-year extension estimated at nearly $145 million that will kick in starting with the 2016-17 season and run through Davis' 28th birthday.

First-round picks from the 2012 NBA draft like Davis are eligible to negotiate contract extensions now through Oct. 31. But like any free-agent deal around the league, they can't be formally signed until July 9, when a leaguewide moratorium on roster business is lifted.

Davis tweeted he had agreed to the deal shortly after the window for negotiations opened after midnight ET.

Team officials, including general manager Dell Demps and new Pelicans coach Alvin Gentry, were in Los Angeles at the first allowable minute Tuesday night to formally make the pitch to Davis and agent Thad Foucher that ESPN.com first reported in May.

The exact figures of the extension will depend on how much the NBA salary cap actually rises in 2016, but sources told ESPN.com the Pelicans presented Davis with the biggest offer possible the moment they were allowed to. It appears, though, that the figure will break Kobe Bryant's record for most total dollars in an NBA contract. Bryant signed a seven-year, $136 million deal with the Lakers that started in the 2004-05 season.

The five-year deal, which includes a provision that will allow Davis to return to free agency after Year 4, will make the 22-year-old New Orleans' designated player.

In April, in his first trip to the postseason as a pro, Davis joined Kareem Abdul-Jabbar, Wilt Chamberlain and Bob McAdoo as the only players in league history to average at least 30 points and 10 rebounds in their first four NBA playoff games.

New Orleans suffered a four-game sweep in the first round at the hands of the eventual champion Golden State Warriors,but surprised many pundits by beating the defending champion San Antonio Spurs on the final day of the regular season to clinch a playoff berth ahead of the Oklahoma City Thunder with a 45-37 record.

Because Davis was elected by the fans to start in last February's All-Star Game, and since he also earned All-NBA first-team honors, New Orleans will have the ability to include a provision in the deal that entitles Davis to start his max deal at 30 percent of the league's salary cap as opposed to 25 percent, provided he is an All-Star starter or earns All-NBA honors next season as well.

New Orleans, like all NBA teams, has the right to bestow designated player status on only one player.

''I just think he's one of those special players that comes along once every 25 or 30 years,'' Gentry said of Davis at his introductory news conference, where he spoke of the up-tempo offense that convinced New Orleans to target Gentry as its top candidate to replace Monty Williams.