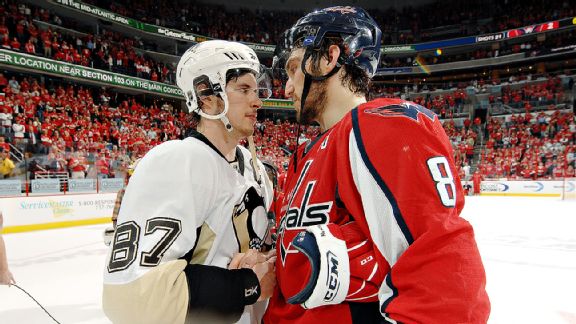 Greg Wyshynski, senior writer: The NHL's current playoff format does a great job of fanning the flames of existing rivalries but hasn't exactly created many new ones. Part of that, obviously, has to do with the decline of the physical chaos in these games that helped cement blood feuds such as that of the Colorado Avalanche and Detroit Red Wings back in the day.

So I think "best current rivalry" comes down to two contenders: The Anaheim Ducks andLos Angeles Kings, a geographic throwdown that is intensified by the presence of some truly delightful miscreants such as Corey Perry, Ryan Kesler, Dustin Brown and Drew Doughty; and the Capitals vs. the Penguins.

I'll still uphold the Penguins and Capitals as the NHL's top rivalry. That's probably because I have covered their incredible series through the years and have a sense of the franchises' previous heat that predates Sidney Crosby and Alex Ovechkin. It's also probably due to the fact that I'm a New York Jets fan who watches them play the New England Patriots and still considers a painful one-sided feud as a "rivalry," technically.

The animosity between the teams is very real, but so is the fact that the Penguins own the bragging rights here in a significant way. So what used to be a clash of heavyweights has almost morphed into one where we tune in to see whether Charlie Brown finally kicks the football before the Penguins yank it away again. Or, in a more fatalistic sense, how the Capitals will do themselves in this time.

But the fact remains I'm always watching it.

Emily Kaplan, national NHL reporter: The great thing about rivalries is that they can evolve over time. Take, for example, the Chicago Blackhawks. Traditionally Chicago's rivals have been theSt. Louis Bluesor the Red Wings. The Detroit rivalry has been dormant for obvious reasons, and the Blues? Yes, it's always competitive when the Central Division foes play -- especially in the playoffs -- but we're not exactly seeing brawls every night. In fact, you could argue that the Nashville Predators are the Blackhawks' biggest rival right now. (When I was putting together realigned divisions for an expanded NHL, the first thing Patrick Kane noticed when I ran it by him was that I had separated the Hawks from the Predators. "That has become a really good rivalry," he said.)

That preamble leads me to the Penguins and Capitals. What's great about these two teams is that they've sustained success over the past few years. In the Barry Trotz era, the Capitals leading the Metropolitan Division has become a yearly tradition -- just as Washington ultimately being foiled by Pittsburgh has. And of course, there's the whole star-power element. The league's marketing strategy of late has been to pit two stars against each other, a la the NBA's Magic vs. Bird strategy.Mario Lemieux vs. Wayne Gretzky paved the way for Crosby vs. Ovechkin (and eventually it will be Auston Matthews vs. Connor McDavid).

Pittsburgh vs. Washington is a good rivalry, and a steady one, but I don't think it's the fiercest of right now. To me, that's the Calgary Flames vs. the Kings. When I watch those games, I see two teams that really don't like each other. It's not just nastiness but also features an element of emotion that's missing from Pittsburgh and Washington. The heat between the Flames and Kings was ignited last season when Matthew Tkachuk elbowed Doughty, earning a two-game suspension -- and, man, it has not cooled down since. I'll just leave this here ... tell me if you disagree.

Victoria Matiash, NHL fantasy columnist: Although it hasn't yet reached the caliber of other current NHL rivalries (see above), the "Battle of New York" feels fun again. What the conflict lacks in violent razzamatazz -- it's difficult to picture New York Islanders goalie Jaroslav Halak going after New York Rangers winger Rick Nash in the spirit of Billy Smith pounding Rod Gilbert back in 1972 -- it partially makes up for in competitiveness. Right now, both clubs are battling for a playoff spot. Wins and points are becoming increasingly precious between these two Metropolitan teams.

And there's bad blood. Despite the Rangers enjoying greater overall success, the Islanders have owned the Manhattan squad in recent play, beating them in nine of their past 11 regular-season matchups. That's gotta smart. Amplifying this smarting is the Isles' most recent 7-2 clobbering of the Rangers on Jan. 13, in which rookie forward Mathew Barzal ran rampant with two goals and three assists. I certainly have the final pair of contests between these two -- on Feb. 15 and April 5 -- circled on my must-view calendar.

This rivalry also has legs. For star power, the Islanders have an up-and-coming hot shot and Calder Trophy candidate in Barzal emerging behind fellow center John Tavares (assuming the coveted pending free agent re-signs with New York). Forward prospect Kieffer Bellows is touted as the next big thing. For the Rangers, even if the organization sells off some assets ahead of the trade deadline -- Nash, Ryan McDonagh, maybe Mats Zuccarello -- top center Mika Zibanejad, Pavel Buchnevich and young defenseman Brady Skjei likely aren't going anywhere. Forward Filip Chytil is another highly touted prospect expected to make an impact soon. And elite goaltender Henrik Lundqvist remains signed until 2020-21. There's plenty of potential for entertaining conflict to come.

Whatever else is in play, opposing teams from New York don't like each other. They never have, and they likely never will.

Chris Peters, NHL prospects writer: I just don't think anything has surpassed Caps-Pens as of right now. The Capitals just have to find a way to beat Pittsburgh in a playoff series to turn the temperature up a few more degrees in that one. It's still compelling theater, as Crosby and Ovechkin are still compelling central figures. That said, I think we're at an interesting crossroads for the whole concept of the rivalry.

One of the biggest hurdles in creating and sustaining rivalries is the salary cap. Despite the prevalence of long-term contracts keeping star players with their teams longer, teams have to move other pieces around enough that they lack consistency of success. The Blackhawks were the old standby for the past eight years, basically. Their sustained success gave rise to some really great rivalries, namely with the Vancouver Canucks and the Blues. Something also was brewing with the Predators, as Emily noted. As Chicago takes a step back, however, the Blackhawks might have fewer high-profile matchups to keep the fires burning.

There's also the continued decline in fighting. The game is changing, which means rivalries are going to look different because the game looks different. Fewer line brawls and enforcers staging fights to raise the temperature of the games might not necessarily be a bad thing on the player-safety, skill and speed-of-the-game fronts, but I think we have to recalibrate what we should be looking for in terms of rivalries.

That's one of the reasons I think the Penguins and Capitals can endure for a bit longer. Although they have had some physical battles over the years -- and players such asTom Wilson and Ryan Reaves could certainly still send sparks flying -- those games are dominated by the skill players and are extremely entertaining.
Report a correction or typo
Related topics:
sportsespnchicago blackhawksnew york rangerssidney crosbyrivalryrivalriesstanley cup playoffslos angeles kingsstanley cupnew york islanderswashington capitalsnhlpittsburgh penguinsnashville predatorsalex ovechkincalgary flames
Copyright © 2020 ESPN Internet Ventures. All rights reserved.
More Videos
From CNN Newsource affiliates
TOP STORIES