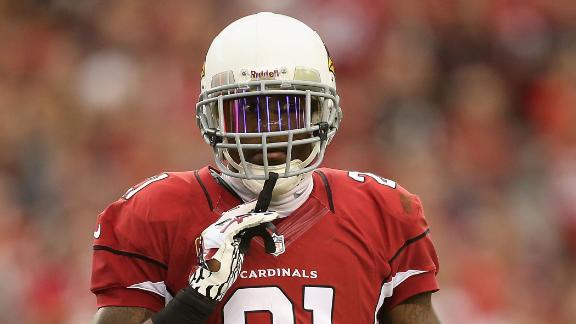 ESPN
By Josh Weinfuss
GLENDALE, Ariz. -- Patrick Peterson had about eight minutes to celebrate after announcing his five-year extension worth $70 million with the Arizona Cardinals on Twitter before the Seattle Seahawks' Richard Sherman chimed in.

This time it wasn't through Sherman's own words. He retweeted a tweet that of the eight touchdowns the corners combined to allow last season, Peterson gave up seven of them. Peterson stoked the fire this morning and Sherman responded with a photo of his Super Bowl ring.

To Peterson, his ongoing Twitter feud with Sherman is all in good fun. Peterson doesn't think Sherman sees it the same way.

The Cardinals clearly had Sherman in mind when they gave Peterson an average of $14.01 million per season. It's slightly more than the $14 million average Sherman received as part of an extension signed in May. It was important to Peterson to become the highest-paid cornerback in the NFL.

"I always had visions that I always wanted to be the highest-paid cornerback to ever play the game," Peterson said. "And now that I am, it feels so surreal."

For months, Sherman was able to point to his bank account as the social media war escalated. Starting Saturday night, Sherman had to find a new way to respond to Peterson but all Sherman is doing is adding extra motivation for a player who doesn't need it.

"I think it's just going to make me take my game to the next level," Peterson said. "Obviously, we had our exchanges over the last month or so -- obviously he's still exchanging words this morning. But like I said, it is what it is.

"I have no harsh feelings toward Richard, I wish him the best of luck throughout his career, throughout his season. I guess it'll be much-watch TV when we play Seattle."

Peterson Happy With Deal, Wants Title
Cardinals CB Patrick Peterson talks about his new deal, which makes him the highest-paid cornerback in the NFL, the state of the team and his rivalry with Seahawks CB Richard Sherman.