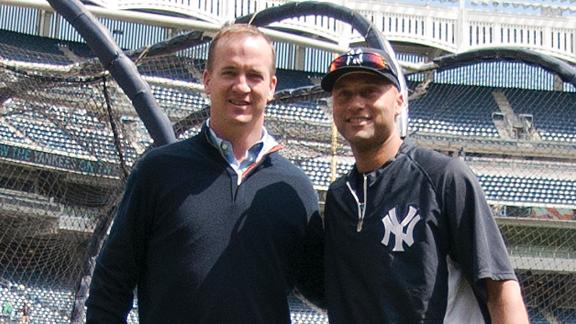 Denver Broncos quarterback Peyton Manning may not have won Super Bowl XLVIII in February, but he still got a primetime spot fitting of his status in the league with an appearance on the "Late Show with David Letterman" on Monday night.

And as Manning and Letterman, who both began their professional careers in Indianapolis, covered a variety of topics, Manning revealed the strength in his right arm is still not at presurgery level.

Manning missed the 2011 season after having spinal fusion surgery, his fourth procedure on his neck.

He signed with the Broncos in March 2012, and has thrown 92 touchdown passes in the last two seasons combined as the Broncos have had back-to-back 13-3 regular-season finishes.

"I'm not at a 100 percent compared to what I was before my surgery,'' Manning said during his segment. "But I have made strides each season and this year felt a lot better than I did the year before. These nerves just go at their own pace.''
Manning also referred to his recovery, including the difficulty in dealing with the fact many who had similar surgeries said it would be difficult to predict how quickly or how much the nerve in his arm would regenerate, but that he could simply wake up one day feeling better than ever.

"You talk about waking up every day at 7 a.m. excited and then being pretty depressed by noon every day -- today's not the day,'' Manning said.

Manning also discussed how he tried to regain the feel in his throwing motion and the differences in the player he is now compared to the 13 seasons he spent with the Indianapolis Colts before his surgery.

"I used to sit in the mirror and just sort of go through my throwing motion trying to get the feel back the way I'd always thrown before,'' Manning said. " ... Maybe I can't throw the 100 mile-an-hour fastball any more, but I can still strike you out, picking my spots, working the plate. I don't make the same kind of throws I used to make, I try to use the cerebral part, use my experience.''

And as he said in the days leading up to the Super Bowl, Manning said he has no intentions of retiring. He has participated in the Broncos' offseason program and is set to enter the third season of a five-year contract.

Manning was cleared to play by the team's medical staff as well as an outside doctor not associated with the team in exams on his surgically repaired neck in March.

"I have been rejuvenated these past two years after sitting a year out,'' Manning said. " ... When you get back out there, boy, I've just been so grateful to get back out there with my teammates putting in the hard work.

"I still enjoy what I'm doing, the preparation part, and I still think I can help the team. If the Broncos say, 'Hey we don't need you any more,' that'll probably be the end of it. And as soon as I don't feel like I can do the same things I've been doing that's when I'll stop playing.''

In other topics, Manning also covered:

• The Super Bowl blowout -- a 35-point loss to the Seattle Seahawks -- when the Broncos had a bad snap that resulted in a safety on their first offensive play of the game.

"Not the way you want to start a game,'' Manning said.

Letterman asked if the Broncos could see the poor performance coming in the days leading up to the game.

"No, certainly didn't see it going that way, we were excited going into the game and we had a great week of preparation ... and it just didn't go our way, Seattle played a lot better than we did," Manning said. "They were the better team that night and they certainly deserved to win. Tough pill to swallow and one you've got to learn from. We can be better for it this season. ... We just couldn't get a whole lot going.''

• The fact on-field microphones pick up the cadence during games, including Manning's oft-used "Omaha.''

"I don't like it, I'm not a fan of it ... because it reveals terminology an opponent next week can use,'' Manning said. "I don't like Bill Belichick hearing our plays that we're using ... I think you've got to get up there and say some really negative things about the commissioner, Roger Goodell, you know, 'Blue 20, blue 20, Roger Goodell is a no good you know what,' and I think they'll just kind of turn that volume down.''

To that Letterman responded, presumably referring to the Spygate scandal, "As we know about Bill Belichick, he brings his own microphones, so you don't have to worry about that.''

• His brother's recovery from ankle surgery. New York Giants quarterback Eli Manning had surgery recently to clean out his ankle.

"He's doing good, I saw him [Sunday] and he's going to start throwing this week,'' Manning said. "He's going to participate in some of these offseason practices. He's good.''

Peyton Visits Jeter At Yankee Stadium
Stephen A. Smith and Skip Bayless debate whether Peyton Manning or Derek Jeter had a better career.