Peyton Manning to Bill Belichick: 'This might be my last rodeo' 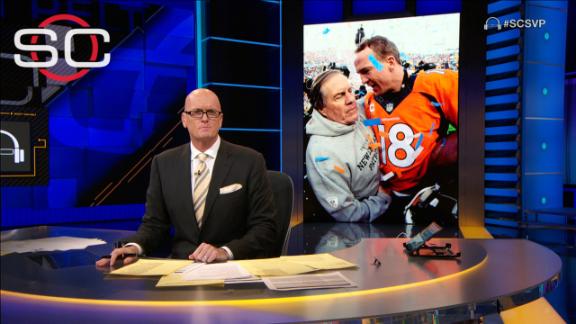 When Peyton Manning hugged Bill Belichick at midfield after the Denver Broncos' 20-18 victory over the New England Patriots, the quarterback acknowledged to the coach that Sunday's AFC Championship Game might be the last time they match wits.

"Hey, listen, this might be my last rodeo. So, it sure has been a pleasure," Manning said.

Belichick's reply wasn't caught on camera, and on Monday he told reporters that what he had said to Manning on Sunday would remain private.

"Don't have anything to share," Belichick said Monday. "I shared it with Peyton."

Sunday's game was the 20th time that Manning has faced Belichick and the Patriots and the eighth time he has won a game against the coach. Manning improved his playoff record versus Belichick to 3-2.

In an Instagram post Tuesday, Anderson wrote,"He said, 'CJ way to fight and prove everybody wrong you belong in this league and your one hell of a player I love the way you run keep climbing to be great.'"

Anderson also wrote that Brady, who was selected with the 199th pick in the 2000 draft, was an inspiration after he went undrafted out of Cal in 2013.

"Thanks Tom for telling me those words they will stick and I know a lot of people don't like you but I have MAD RESPECT," Anderson wrote.

Manning, 39, is under contract for 2016, with a salary-cap charge of $21.5 million, which is bigger than his cap figure last season when the Broncos asked Manning to take a cut. Manning has said he wouldn't make a decision about 2016 until this season is over.

Broncos executive vice president of football operations/general manager John Elway said last week that with the potential of a Super Bowl trip still in play, any decisions about 2016, either by Manning or the team, could wait.

Manning missed six consecutive starts this season because of a tear in the plantar fascia near his left heel, but he returned in relief ofBrock Osweilerto rally the Broncos to a win over the San Diego Chargers in the season finale and has started both of Denver's playoff victories.