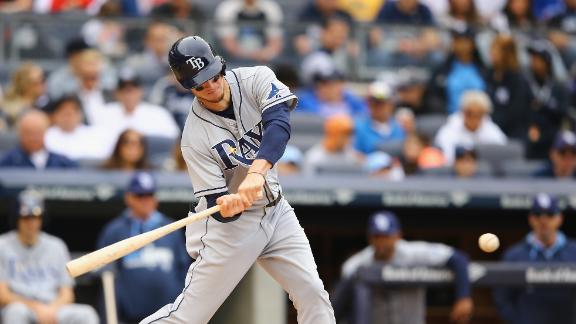 "I came to see Derek play," Manning said. "Derek and I have been friends -- he's a couple years older than me, but we've been pretty much professionals at the same time. So I wanted to pay my respects and see him play for the last time."

Manning stood to the side of the cage and chatted with Jeter in between batting practice turns.

Major League Baseball tweeted out a picture of the two sports icons talking near the cage.

Two global #icons hanging out in the Bronx. pic.twitter.com/4n8pm3jsv6

Manning and his younger brother Eli, the New York Giants' star quarterback, were going to be Jeter's guests in his suite for the Yankees' game Sunday against the Tampa Bay Rays.

"It's the only time I'm gonna get to New York before our season starts, and they're not coming out to the [Colorado] Rockies this year," Manning said. "I wanted to see [Jeter] play in person, and get a good picture for my scrapbook."

After the Yankees' 5-1 loss to the Rays, in which Jeter went 0-for-4, Jeter was asked if he was disappointed he and his team didn't give the Mannings more to cheer for.

"Aw, I wasn't thinking about that," Jeter said. "I didn't see Eli, cause he came a little later. But Peyton, I haven't seen in a little while, so it's always good to see him and catch up with him."

Jeter is 29 games into his final season with the Yankees. The longtime Yankees captain, who will turn 40 in June, announced back in February that he will retire at the end of the year, his 20th in the majors.

"I feel a lot better than I thought I would coming off that surgery a couple years ago," Manning said. "When you miss a year for an injury, when you get back out there, boy you really feel rejuvenated and really just feel glad to be back out there. So I've really enjoyed the past two years, and I'm excited about this season.

"As long as I'm still enjoying the preparation part of it, as long as I can still produce and help a team -- I don't want to just be out there hanging on -- then I'm gonna keep doing it."

Manning predicted he will have a hard time deciding when to hang up his cleats.

"I hope I know when the right time is," Manning said. "I know it was a hard decision for Derek, I know it'll be hard for me. But I can tell he's at peace with it and he's enjoying this season."

The two future Hall of Famers have maintained a "unique friendship" during their respective careers, according to Manning. He estimated that he's seen Jeter play in person "probably six or seven times," including a couple playoff games.

"Derek's been to a number of Colts games through the years," Manning said, "and he's got an open invite to the Broncos games this fall after the Yankees finish their season."

As for Manning, he will be spending Monday in New York as well.

"I'm doing [the David] Letterman [show] tomorrow night, so I'm paying my respects to him, who's also retiring," Manning said, chuckling. "I'm sad to see some of these guys retiring. I'm not far behind."