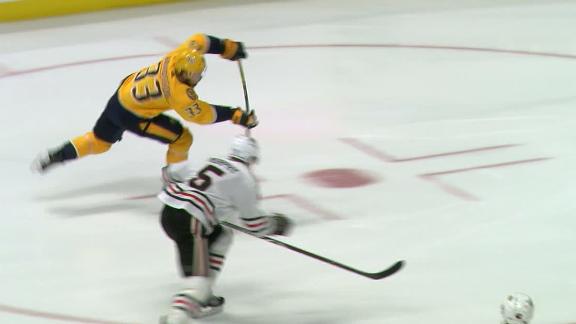 ESPN
NASHVILLE, Tenn. -- The Nashville Predators have proven they can finish a season almost as well as they start.

Viktor Arvidsson scored the go-ahead goal at 3:33 of the third period, and the Predators won their second straight Central Division title by rallying from an 0-2 deficit to beat the Chicago Blackhawks 5-2 Saturday night.

With St. Louis beating Vancouver 3-2 earlier Saturday, the Predators needed two points against Chicago to win the Central or risk going from division champs to possibly third if Winnipeg finished off with a win at Arizona later. The Predators, who will face Dallas in the opening round of the playoffs next week, now are assured of home-ice advantage through at least the first two rounds.

A division title seemed out of Nashville's reach after a 5-0 loss March 23 in Winnipeg.

"We were pretty down after that Winnipeg loss," Arvidsson said. "We kind of knew that was the game that we had to win in Winnipeg. They lost two games I think right after that and we kind of stayed in it. After that, we kept battling."

The Predators, who started the season a league-best 13-3, are the only Central Division team to reach 100 points.

"Eleven days ago probably weren't a lot of odds in our favor just because we didn't have the tiebreakers, we had games out on other teams, we were behind a point or two, so things weren't looking our way," Nashville coach Peter Laviolette said. "But a stretch run of 8-2-1 I think it was in 11 games and here we are. So I'm really proud of our guys."

The Predators struggled mightily when allowing the first goal all season, but they've have rallied from two-goal deficits in each of their past two games.

Arvidsson set the franchise record with his 34th goal of the season 22 seconds into the man advantage. His wrister from the left circle beat goalie Cam Ward glove-side and gave Nashville its first lead of the game, which Arvidsson celebrated by jumping in the air behind the net.

"I got really happy," Arvidsson said of his jump. "I had so many chances before that and it was nice to finally see it go in. He made a bunch of saves on me on that power play before in the second, so it was nice."

Filip Forsberg and Nick Bonino each had a goal and had an assist, and Dante Fabbro scored his first NHL goal for Nashville, which now has won five of six. Colton Sissons added an empty-netter with 2:09 left.

Brendan Perlini and Drake Caggiula each scored for Chicago, which lost three of its final five. Ward made 45 saves.

"Wardo made a lot of big saves for us," Chicago coach Jeremy Colliton said. "I would've liked to play a little better defensively for him. Disappointed obviously to end with a loss and probably wasn't our best game."

This time it was the Blackhawks scoring on their first shot with Perlini's wrister from the left circle beating Rinne's glove at 2:58 of the first period. Artem Anisimov hit a post at 5:00, then Caggiula made it 2-0 Chicago with a wrister off an assist from Patrick Kane midway through the period.

Fabbro, who joined the Predators last week after wrapping up his junior year at Boston University, pulled the Predators to 1-0 with the first goal of his career at 9:07 of the second. Fabbro's wrister from the left circle went over Ward's glove.

"I kind of blacked out there," Fabbro said. "I was aiming for the high far side and luckily it went in. It went post and in. It was a pretty cool feeling."

Seconds after a power play ended, Forsberg tied it up with a slap shot for his 28th this season with 1:10 left in the second.

Nashville put it away with three goals in the third. Bonino's goal came inside the final minute with the celebration already well underway.

Predators: Open the playoffs at home against Dallas.