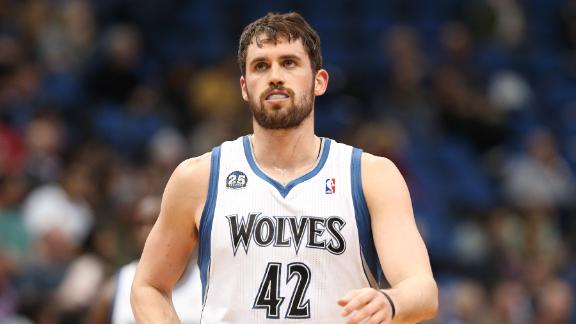 ESPN
MINNEAPOLIS -- During a weekend trip to Boston, All-Star forward Kevin Love has been taking pictures with fans and seeing the sights, leading Celtics fans to speculate that he's going to follow in the footsteps of Kevin Garnett as the next Minnesota star to come to town and turn around a struggling franchise.

"The last I knew Kevin was under contract with us, and I expect him to be playing for us next year," Saunders said Sunday after a workout of draft prospects. "I don't really dictate where guys go on vacation or what they do. They can go wherever they want to go."

Love can opt out of his contract after next season, and the three-time All-Star has yet to make the playoffs in six years with the Timberwolves. That's led many to believe that he will leave next summer to play for a contender in a bigger market.

The situation has prompted the Timberwolves to consider a trade to avoid losing him without compensation. But Saunders has made it clear that he doesn't feel as though he has to make a move this summer. He views Love as one of the top offensive players in the league, a 25-year-old who has improved his game every offseason.

So if other teams do want to get their hands on one of the NBA's top power forwards, it won't be easy.

"I know there's a feeding frenzy out there from a lot of teams," Saunders said. "Unfortunately, they have no say. I plan on Kevin being here."

If Saunders was posturing, he has good reason. The draft isn't until June 26, and the best offers from teams desperate to land Love don't figure to start rolling in until the week of the draft, or perhaps not even until draft night, and Saunders has plenty of options.

He could move him right around draft time for what is expected to be a package that includes high picks and a veteran player or two. He could wait for July 1 and look to build a package around more established, veteran talent.

Or he could hold on to Love, try to add a few pieces to a team that finished 10th in the West, and hire the right coach to replace the retired Rick Adelman and show Love that the team is headed in the right direction. It worked for the Portland Trail Blazers with LaMarcus Aldridge, and it worked years ago for the Los Angeles Lakers and Kobe Bryant. The Wolves can also pay Love about $26.5 million more than any other team.

And if Love still does depart after next summer, the Wolves won't be left empty-handed. They'll have about $17 million in extra salary cap room to attack the free agent market, though luring stars to a wintry climate to play for a team that hasn't made the playoffs since 2004 has always proved to be a challenge.

The next big step will be hiring a coach.

The Wolves had discussions with Memphis' Dave Joerger over Memorial Day weekend, but Joerger stayed with the Grizzlies, who sweetened his contract to remain with the 50-win team.

Saunders said he will meet with Wolves owner Glen Taylor this week to evaluate the search, which has been influenced some by the uncertainty surrounding Love.

When asked if he would have a coach in place by the June 26 draft, Saunders said "there's probably a better chance that we would than we wouldn't. We're not going to put a time frame on it."

As for those excited Celtics fans, Saunders said they should calm down. But he knows they won't.

"They're the same fans who thought they had Tim Duncan," he joked. "They still think they got Tim Duncan in the draft. I'm not really sure, but the last I looked he was playing for San Antonio, Old Man Riverwalk."

David Ortiz hopes that's not the case. After Love visited Fenway Park on Sunday, the Boston Red Sox slugger offered him a helping hand via Twitter:

- David Ortiz (@davidortiz) June 1, 2014Information from the Associated Press was used in this report. 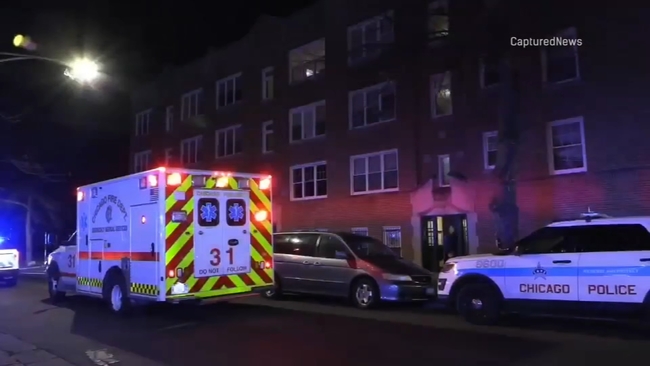 Shooting that killed mother in Ravenswood Manor may have been retaliation, police say