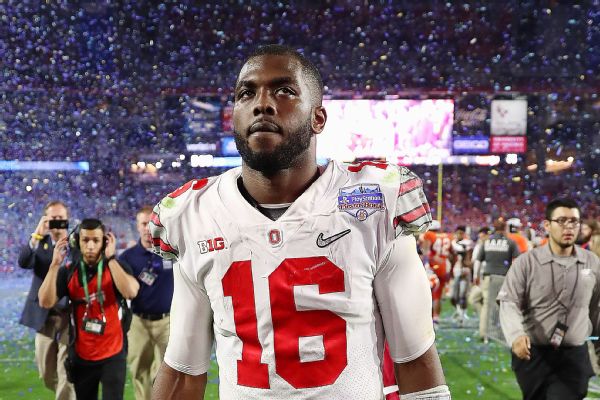 The veteran quarterback hinted after the shutout loss in the College Football Playoff that he would have trouble leaving the Buckeyes on a low note, and Barrett confirmed Wednesday on social media that he would be back for his senior season -- and a chance to put some records seemingly out of reach.

The two-time Big Ten Quarterback of the Year had other options available to him. He could have either declared for the NFL draft or potentially used his degree and transferred as a graduate instead of facing what could be an open competition for the job he has held for most of the past three seasons at Ohio State. Barrett currently isn't considered to be a great pro prospect, and he is also deeply loyal to the Buckeyes, which may have left only one choice for him.

"My main focus was to focus on this year," Barrett said after the PlayStation Fiesta Bowl on Saturday. "I didn't really give it that much thought, but it will be really hard for me to walk away when we just lost 31-0."

A few days later Barrett posted a brief message confirming that sentiment on Instagram and announcing his plans to come back to the Buckeyes for another potential run at a championship.

He'll also have a chance to keep rewriting the record books both at Ohio State and in the Big Ten. Barrett's name is already all over them thanks to his 100 touchdowns accounted for, which includes a single-season conference record of 45 scores during his redshirt freshman season in 2014. There is also still room for him to develop after his completion percentage dropped for the second consecutive season.

The Buckeyes have already made one official change to the coaching staff to help get their passing game back on track, hiring new quarterbacks coach Ryan Day on Tuesday to replace Tim Beck, who left for Texas. Numerous reports have also tied Kevin Wilson to Ohio State as a potential new offensive coordinator, though it's unclear at this point how head coach Urban Meyer might make room for him on his staff.